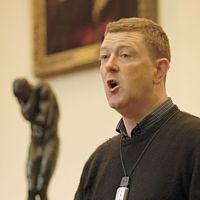 In response to recent indications from the Government that there would be an apology on behalf of the British people for the Transatlantic Slave Trade, 4th Form historians wrote to The Office of the Deputy Prime Minister and the Director of the pressure group, Anti-Slavery International.

Following heated debates in class, the pupils were seeking clarification as to the nature of the Government’s planned statement and a clearer view of the rationale informing the move. The Deputy PM wrote a full answer to the pupils’ questions and applauded their interest in the issue of slavery in the world today. Director of ASI, Aidan McQuade came in person to debate the issue with pupils. After his presentation to a mixed group of around 170 4th and 5th Formers, Aidan answered the questions set by one of their classes, which were read out by Eve Palos. What followed was a fascinating exploration covering such issues as the meaning of freedom and the concept of guilt. Aidan found the meeting highly stimulating and he has offered to work to produce a close bond between Mill Hill and ASI.

This development is particularly appropriate in our 200th anniversary year, as the co-founders of our School were fervent abolitionists.