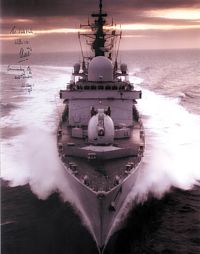 Our senior Navy cadets felt very privileged when they received an invitation in December to spend a day on board HMS Southampton, the School’s affiliated ship.

Lead by Head of the Navy section, Vincent Livesey, cadets joined the Type 42 Destroyer at the Trafalgar Gate, Portsmouth Naval Dockyard, before commencing a short passage to Southampton. Whilst on board, cadets were made to feel very welcome as they received an extremely detailed introduction to all areas of the ship including the bridge, the missile room and weaponry, the galley, and the operations room, which contained all the radar screens. Various manoeuvres and demonstrations were performed by the crew including a dynamic fire fighting display on the flight deck and a spectacular display by the ship’s Lynx anti-submarine helicopter which landed on board whilst operating in the Solent.

Despite a very early start, and the fact that several cadets felt a little green on occasions due to strong winds, all agreed it was a truly amazing opportunity, and one which they would never forget.