The team’s success in reaching the semi final – a nail-biting affair against eventual winners Millfield, which came down to the very last hole – qualified them to enter a play-off with 6 other schools for the separate National competition. After an outstanding performance, the boys ended up winning, making them the HMC National Stableford Foursomes Champions.

The team were unbeaten all the way through the competition until the Millfield game and fully deserved to win for all their efforts.

This was an outstanding achievement, and it was particularly encouraging to hear the boys being praised by other Masters for their etiquette both on and off the course. 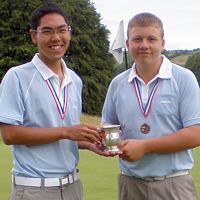