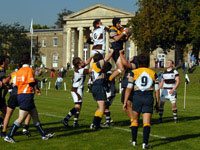 1st XV had an outstanding win against St Paul’s on Saturday 18 October winning 41-6. Tries were scored by H. Watson, S. Rosenkranz x3, S. Delamothe, K. Nwokenna, K. Karikari with O. Bass converting. This comes on the back of an Area Cup Semi Final win of 55-6 against London Oratory School and a win against UCS of 65-3. For full match reports, please click here.

This was schoolboy rugby at its best and to name a man of the match was impossible. Charlie O’Shea was extremely effective at the break down and won many turn over balls, as did Sam Castle and Dan Richards. Stefan Novakovic did what he does best, ripping many a ball out of contact situations and going on to carry the ball 5 metres with three players on his back! Seb Delamothe led by example and had a sound performance. Oliver Bass controlled the game perfectly and had both Sam Rosenkranz and Hugo Watson outside him to pick lovely running lines and open up the St Paul’s defence. This was an incredible achievement from the boys and they have now completed the first half of the season undefeated. Will this season be the first undefeated season in the history of Mill Hill rugby…watch this space!

Our U15Bs are also in winning ways, beating St. Paul’s 19-15 on Saturday in comfortably their best performance of the season. Tries were scored by M. Maruthan, D. Farrow and J. Charkin with captain Woody Holding scoring two conversions. The bravery in defence, character and commitment of the whole team were outstanding, typified by second-row Zack Field who was exceptional throughout.