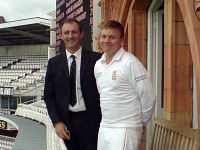 Following Adam Rossington’s successful season last year, he was selected for trials to play for the England Team. These were held at Sedbergh School and were attended by many exceptionally talented cricketers from all over the country. Adam played in two out of the three matches and achieved sound results in both of the games, scoring 54 and 92.

As a result of this, he was selected for the full England U15’s versus the England U16’s which was played at Lords on the 9th September. On a tough wicket he achieved 35 being the second overall top scorer; the final result was a match tie. Adam has had a great season and we all congratulate him on his performances and look forward to watching his progression over the forthcoming months.