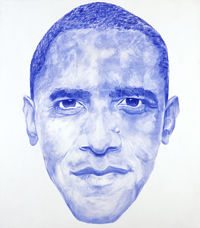 Old Millhillian Ben Kustow’s 5 feet-tall oil on canvas painting of US President Barack Obama is on show for ‘Obama Tuesday’ at London’s Jealous Gallery. Ben, now a student at Central St Martins, said he was attracted by Obama’s face, the openess, the honesty, the direct look. He painted Obama in blue “because I saw it as a blueprint of something big that was about to happen. When I think of Obama, I think of the usual stuff – hope, love…we’ve been waiting so long for this day to happen.”

When Ben had to transport the huge portrait across London recently it provoked an astonishing and very positive reaction from the public: “As soon as I got it out of the door people were screaming ‘Obama! Obama!’” and he was surrounded by people wanting to take photos or get a closer look. Ben contacted the Guardian’s G2 with the amazing story – and journalists recreated the excitement yesterday with a life-size cut-out in Trafalgar Square.