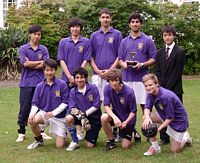 The competition kicked off with an intense match between Ridgeway, captained by Ollie Cheng, and Burton Bank, led by Kevin Karikari; both veterans of the field. Despite plenty of opportunity to score, the teams were ultimately thwarted by strong defence on both sides and frustratingly the whistle was blown on a goalless draw. With adrenalin and nerves running high, Burton Bank then overpowered Collinson 7-0 in the second match; impressive goals were scored by Kevin Karikari, Philip Busse, Zuriel Ukachi-Lois and Mark Fikri, despite the best efforts of Jack Zadmehr – a name to watch for the future.

The final match was played between Ridgeway and Collinson; pressure was on as Ridgeway needed to score more than seven goals to win the competition. Six fantastic goals were scored by Max McGee, Mostafa Moradalizadeh, Oliver Cheng and Bryan Lam; what next? The crowd were going frantic and at the very last second of the game, Will Cheng powered the ball into the net, to notch up the elusive seventh goal. In a scene of almost unbearable tension, Ridgeway proceeded to take the match on penalties, with Mark Fikri and Yianni Fafalios admirably keeping their cool.

Ridgeway House therefore proudly took the trophy back to House; the stars of the match were Ollie Cheng, Will Cheng and Max McGee for Ridgeway, and Mark Fikri and Philip Busse for Burton Bank. Many thanks to Miss Farrant for organising the match, and to Mr Lawson for gamely agreeing to referee.