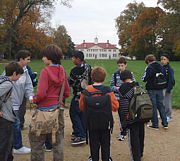 Forty-seven Belmont pupils woke up on Wednesday, 5 November asking who had won the U.S. presidential election. No, not the dream of a political studies teacher, but the reality of the History Club’s trip to Washington DC The forty-seven Year 7s and 8s had quickly been absorbed by the life of the city around them, be it who won the election or glorying in the Washington Capitals ice hockey team’s win over the Hurricanes on Thursday night. 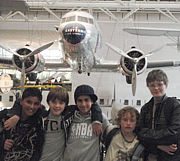 Each day was filled with visits to places often seen on the television, such as the view of the White House or the Capital building. There were the monuments like the Lincoln Memorial and the ride to the top of the Washington Monument. There were the Smithsonian Museums like the Natural History and Air and Space. There were solemn moments such as visiting the eternal flame marking the grave of JF Kennedy and watching the changing of the guard at the tomb of the unknown soldier. Of course there were lighter moments, like watching the 3D Imax movie and trying to touch the fishes, riding the simulators at the Air and Space museums or some of the girls’ reactions when Mr. Pace told a ghost story. This is not to mention the visits to Mt. Vernon and to the National Zoo. When many pupils found themselves footsore and tired there were the treats of shopping at Pentagon City and the chance to go to the ice hockey match.

Was it worth it? It was certainly exhausting; the entire group of 47 pupils and 6 staff spent most of the flight back to London asleep. There were complaints by many an 11 year old of being too tired to go on, the odd tummy ache and quarrel amongst roommates, but all of this was forgotten when another place, only ever seen on TV, appeared around the corner or another opportunity came to sample American cuisine. Will it happen again? Maybe, there are a lot of other places yet to visit before another return to the wide streets and gleaming monuments of Washington DC.