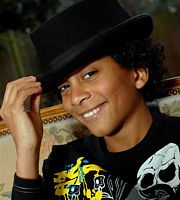 Max E-C, who attended Stagecoach Theatre Arts Classes on Saturdays and has no other formal drama training other than drama classes at Belmont, was chosen out of 100 children for the part of young Michael Jackson at the Lyric Theatre, Shaftesbury Avenue. The part is shared with three other boys who each do two performances a week.

Three days before his audition Max had laryngitis and lost his voice but still managed to get through to the final round after being dosed up with honey and lemon! His first performance was on 18th February and about 40 of his friends, mainly from Belmont, came to watch. Max said he had a ‘swarm of butterflies in his tummy’ but in spite of his nerves found it very exciting and couldn’t wait for the next performance. He already knew the words to most of the songs and has enjoyed learning some new dance moves.