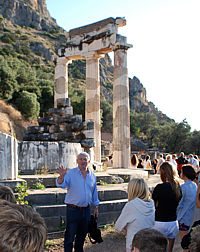 Early on the 17th of October a group of 24 keen Classics aficionados gathered at scenic Mill Hill to leave for this year’s week long junket to Greece. After a short flight to Athens we arrived at the hotel in the late afternoon. We stayed at a number of different places in Greece: Athens, Delphi, Olympia and Tolon.

The highlights of our stay in Athens were definitely the visits to the Acropolis including the fabulous Parthenon, one of the most famous structures of all time, as well as the recently opened Acropolis Museum. These visits on the trip tied in particularly well with the Upper Sixth’s current topics of Greek Art and Architecture, and finally seeing many of the kore and kourai ‘in the flesh’ after only looking at them in text-books was incredible. Of particular note in Delphi was the chance to visit the site of the most famous oracle of the Greek world. 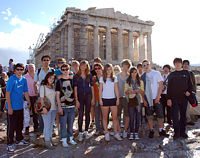 In Olympia, members of the lower school who have been studying the ancient Olympics were awe inspired (apparently) at the site of the first Olympic Games. Indeed Mill Hill’s own version of the sprint event at the Olympics was held with Aidan Kelly from the L6th triumphing narrowly. The final days stay in Tolon gave the opportunity for many excursions to various locations nearby, notably the site of ancient Mycenae and the so-called ‘Tomb of Agamemnon’ as well as the Venetian fort of Nafplio. The location of the hotel on the beach meant many pleasant walks through the nearby town as well as activities including a rather competitive ‘friendly’ game of Football. All in all the trip was more than worthwhile, hugely interesting, enabling students to learn and cement links with fellow students from other schools, and most of all…enjoyable.