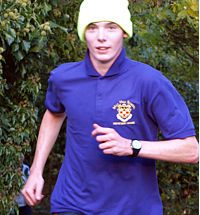 Jack Perry-Williams broke his own record on the 3.5 mile course.

More than 350 Mill Hill boys and girls ran for their Houses in the weeks either side of half term for the revamped House Cross Country Events. There were some amazing achievements, not the least of which was so many pupils out running and seeing 130 boys and girls walk down to Burton Hole Lane for the new start points of the Senior Girls’ and Boys’ courses. Jack Perry-Williams (Ridgeway) broke his own record for the 3.5 mile Senior boys course and has another year to try to get that time under 20 minutes.

All of the Remove initially ran a race before half term but, due to exceptional circumstances this had to be rerun with 95 runners after half term, and the team trophy was won by Atkinson. The boys’ winner was Gabriel Evans (M) and the girls’ winner was Naomi Kendal (W).

The Senior Boys (V Form upwards) ran the tough 3.5 mile course over the Totteridge Valley for the second year running with the team trophy won by Murray and as mentioned Jack Perry-Williams (R) winning the individual race. The Senior Girls ran a new 2.1 mile course over the Totteridge Valley with School House winning the team trophy and Annalise Kingsley (BB) winning the individual race.

School House, consistently in the top three, has been awarded the inaugural House Cross Country shield.