Emotional Trip to the Battlefields of the Great War 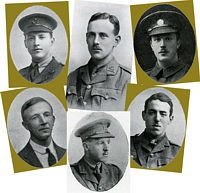 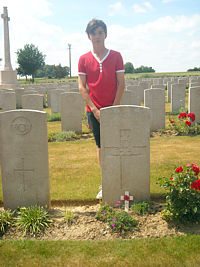 One of our pupils, Jonny Ellis, was able to visit the grave of his Great Uncle, Frederick Enstone – a gunner in the Royal Field Artillery who died at the Somme on September 3rd 1916, aged just 23. Jonny’s mother says: “My Mum wasn’t born until 1928 so didn’t know her Uncle Fred but he was talked about a lot and was a presence in her childhood. As far as we know no-one from the family has visited the grave so my Mum, now 82, was particularly thrilled that Jonny was able to pay his respects.”

At the end of term, a group of 48 4th Formers and five members of staff embarked on the traditional History Department study tour of the Western Front battlefields. As usual, the group stayed in a pretty Flemish town called Diksmuide. The group visited sites in Diksmuide itself, Ypres and the battlefields of the Somme region. As always, the trip was approached not a sight-seeing trip but more as a serious period of study (the groups workbook can be accessed on www.millhillatwar.org.uk), with some ceremonial included as part of the experience. Each pupil was allocated an Old Millhillian character whose name appears on the Gate of Honour. Cemeteries and memorials relevant to the OMs were visited and the pupils placed simple crosses with photographs of their OM character attached.

Both Miss Ellerington and Miss Sutherland were able to visit the graves of members of their family who had fallen in the Great War. At Theipval the group conducted a simple ceremony to remember the 29 members of the School who had died on the Somme battlefields and Josh Kelvin and Max Chowdry placed a wreath on behalf of Mill Hill and the Call to Remembrance at the Menin Gate in Ypres.

The trip enabled Messrs Dickinson and McDonough to bid a fond farewell to Mr Parrish as he leaves the History Department to go on to pastures new in Sweden. All members of staff agreed that the group were a credit to the School, with much good work being done.

Selina Drake, Lauren Steele and Bhakti Shah were prize winners in the workbook competition, with Will Alton being highly commended for his efforts. Selina had this to say about the trip: “In the classroom, I was being told about the War and I didn’t really absorb the information. Now, after witnessing the evidence, the truth has sunk in. This experience has deeply affected me and I, along with many others will carry it with me forever.”