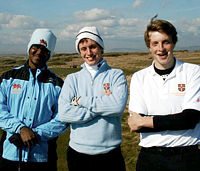 Old Millhillian Sayyid Ahmed Said, currently reading Economics at Trinity College, represented Cambridge in the 2010 Varsity Match at Royal Porthcawl. Up against a very heavily favoured Oxford side, Cambridge fought hard and eventually lost by only a slight 9-6 margin.

Sayyid Ahmed Said, one of Mill Hill’s most successful golfers, was part of the winning team who beat Aldenham in the regional final of the ISGA National Schools Tournament this time last year. He also became Kenyan National Champion during his time at School.

This was the 121st Varsity Match (University Golf Match) – the first was played between Oxford and Cambridge on March 6, 1878. Players earning a spot in the Blues team have the honour of being invited to join the Oxford & Cambridge Golfing Society, and so will have a relationship that continues beyond the end of the match.