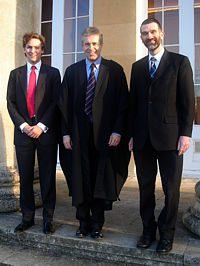 21st-27th November was National Inter Faith week, and because of our dynamic and diverse community at Mill Hill, we took the opportunity to examine more fully the importance of inter faith dialogue. We were delighted that we were able to engage Augustine Booth-Clibborn from the government-supported UK Inter-Faith Network. He spoke in Chapel about the importance of young people getting involved in such dialogue in order to shape the future of our society for the better.

Running concurrently in the School, three other faith-based assemblies took place and students choose which one they attended, whether they were from that faith tradition or not. For our Jewish assembly we were very pleased to welcome into the school for the first time Rabbi David Lister, from Edgware United Synagogue who explained the Jewish festival of Hanukah. The Islamic assembly was delivered by students on the twin themes of the Pilgrimage to Mecca (The Hajj) and the festival of Eid al Adha which are celebrated at this time of year. The Sikh assembly, also presented by Mill Hill students, focused on the founder of the religion Guru Nanak, whose birthday is celebrated this week.

Our Chapel speaker described inter-faith dialogue as “engaging others with integrity to establish a common ground in which progress can then be made”. This spirit is very much alive at Mill Hill, and we seek to build on this strength in the future.