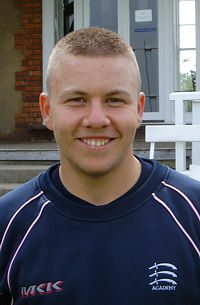 One to watch, Adam Rossington, has again had an extremely successful summer. Having played for the Middlesex County Cricket Club 2nd XI before the end of the school term, he then had a further game for 2nd’s during the first week of July.

Adam was then involved in the Middlesex U17 games that got underway during the 2nd week of July playing matches against Sussex, Essex, Kent and Surrey. Each match was a one day game of 50 overs each and a two day game. In the one day games, Middlesex won all their games except against Kent. They won all their two days games putting them into a semi-final: a trip to Torquay to play Devon. It was a very tense and exciting game with Middlesex winning just 15 minutes before the rain washed the pitch out.

Adam played in the final against Nottinghamshire at Kent County Cricket ground at Canterbury on 1st and 2nd September. He said “It was a really good match with Middlesex winning by one run off the last ball of the day!”. On 16th and 7th July he played a two innings game for an England Elite Player Development XI against Sri Lanka U19s. He scored a creditable 40 runs in one innings and 51 in the other.

He was due to play Sri Lanka again on 5th August for England U17 but unfortunately was unwell and couldn’t play. However, he did managed to shake off his illness in time to play in a triangular tournament against Scotland, where he reached his century, and Ireland for the England EPD XI in Loughborough in August.

Coming up for Adam now is a game at Lords, the Home of Cricket, in an MCC Schools match versus ESCA on Monday, 13th September, in a 50 over game. We wish him continued success.