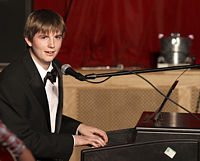 Congratulations to Benedict Kearns for his outstanding achievement in gaining the Diploma of the Associated Board of the Royal Schools of Music (DipABRSM), with Distinction. The Diploma is a professional qualification, normally taken by students who are already at music college, but Benedict was just 15 at the time of the exam which makes his success all the more remarkable. The exam was held at Imperial College just before Christmas, and consisted of a viva voce, sight-reading test and a 35-minute recital – a varied programme of music by Scarlatti, Beethoven, Debussy, Rachmaninov and Copland – which Benedict chose to play from memory. As part of his preparations for the exam, he practised at least two hours a day (no mean achievement with his school work and other activities) and gave recitals at both Westminster Abbey Choir School (where he had been Head Chorister) and at Mill Hill as part of the Friday lunchtime recital series.

While the immediate future is firmly focussed on GCSEs, music is clearly a major part of normal life – aged 12 he had already reached the level of a Grade 8 High Distinction on the piano, and subsequently gained top marks for Grade 8 flute and voice. On Saturdays Benedict attends the Junior Department of the Royal Academy of Music as well as studying conducting with Peter Stark. Conducting has become Benedict’s main passion and he is currently Acting Choir Master at St Jude’s on the Hill, Hampstead Garden Suburb. Benedict is clearly one to watch (and to listen to!).