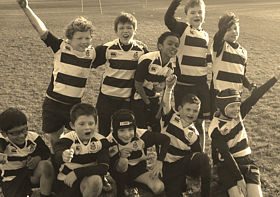 Tom Lindsay OM (Priestley 2001-2006) has been offered a Senior Club Contract at London Wasps, following ten appearances for the 1st XV last season and captaining the side in the Guiness A League. Tom, who graduated from from the academy last year, was thrilled to be offered his contract, saying: “I’m over the moon. It’s something I’ve dreamt about since I joined Wasps at the age of 16.” Tom played in the backs on the wing for Mill Hill, but he’s now a front-row forward for Wasps where he has flourished, playing the last seven 1st XV games for them.

Tom already has international experience as part of the England Saxons team that went on to win the Churchill Cup in 2010. Tipped as a star of the future in a recent Observer article, Tom’s name is put forward for the next generation of the senior England team – and with the 2015 Rugby World Cup being held in England, he’s clearly one to watch!

We are also delighted to announce that Ben Calder (McClure Year 11) has been selected to attend the U16 England camp to be held at Abingdon over this coming half term. 72 young players have been selected for the camp, and from this the selectors will choose their players for the England U16 team, England A and England B squads.