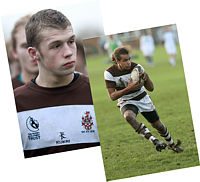 We are delighted to announce that after two selection days, both Mason Caton-Brown (Ridgeway, Year 13) and Tom Rosenkranz (McClure, Year 13) have been selected for the national Independent Schools Barbarians rugby squad. Places in the squad – motto “velociter audacter certandum – you must strive to play fearlessly and fast” – are hotly contested, so it is a great achievement for two of our boys to get through.

Mason and Tom’s first game will be on January 23rd against Irish Exiles in Lancashire, followed by fixtures on February 5th against Crawshays Welsh at Glamorgan Wanderers, and on April 2nd against 2010 National Club champions Cobham U18s. After the domestic fixtures, the Independent Schools Barbarians set off for their tour of Zimbabwe, which will be a fantastic opportunity for Tom and Mason. Congratulations to both boys – this is a wonderful achievement and we wish them every success.

On a separate note, Old Millhillian Tom Lindsay is currently starting games for London Wasps alongside many International players. He had a great game recently against Newcastle Falcons, doing Mill Hill very proud.