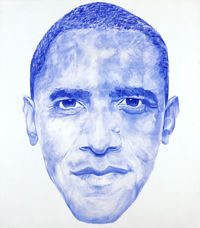 A Fine Art Print of Old Millhillian Ben Kustow’s painting of Barack Obama has been accepted as a gift during the US President’s State visit to the UK.

Ben wrote to her Majesty the Queen asking permission to present President Obama with the print during the visit and he received a very warm reply with a contact name at the Embassy. The Embassy replied by return post accepting the gift for the President, which Ben delivered to Grosvenor Square on the first day of the visit.

Ben is overjoyed with this reaction. For the original 5-feet tall oil on canvas painting, which was created while studying at Central St Martins, Ben said he was attracted by Obama’s face, the openess, the honesty, the direct look. He painted the President in blue “because I saw it as a blueprint of something big that was about to happen”. The original was exhibited in a London gallery, after which we purchased a framed print to display at the School.