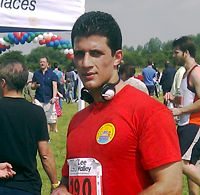 Having now raised nearly £1,600 for this charity, Christos said “I’ve always enjoyed running. I used to play for the Saracens Junion Rugby Club and still play for the team at School. I also enjoy helping people so that was another great reason for taking part in this run.” He added “Noah’s Ark Children’s Hospice is a great local charity which needs to raise money for a new building. It doesn’t get any money from the Government so they need all the donations they can get.”