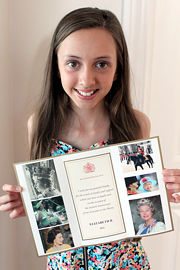 Isabella – or Izzy as she is known to her friends – has been a Foundation pupil since Nursery. Now in Year 7, she has developed a keen interest in History and particularly the Kings and Queens of England.

This being the case Izzy has been very excited about the Diamond Jubilee this year. When she realised a chain of beacons were being lit on June 4th (also her 12th Birthday) as part of the celebrations, she decided to write to the Queen and ask if she could light one.

Buckingham Palace wrote back to Izzy, saying that the Queen was not allowed to intervene and choose who lit the beacons, but recommended an address to contact. Izzy did this, and last week she was given the amazing news that she has been chosen to light the London Borough of Barnet s beacon in Golders Hill Park at 10.15pm on June 4th.

As an extra bonus, this event also coincides with Izzy’s grandparents Diamond Wedding Anniversary in June. This has gained so much interest from the media that Izzy and her grandparents will be appearing in all the local newspapers, on ITV, Channel 5 and on BBC London 94.9 and LBC.

Izzy’s beacon will be one of four thousand lit across the world in celebration of the Diamond Jubilee and will be visible from outer space. What a fantastic birthday present to take part in history being made.