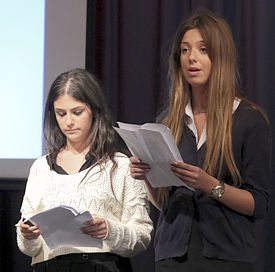 This was the criteria that the judges used to assess business ideas that were pitched during the Lions’ Lair enterprise event that took place on the evening of Tuesday 19th June.

The event was planned and hosted by this year’s Enterprise Education Group. After qualifying through a preliminary round, six teams of pupils pitched original business concepts to a panel of ‘Lions’’ for three minutes and then endured seven minutes of rigorous questioning. The panel of Lions was made up of Mr Antonio Motisi, Mr Theo Theodorou, Mr David Marshall and Mr Michael Berwin.

The event began with reception on a sunny Top Terrace and then moved to a very warm Patrick Troughton Theatre. It was clear that a tremendous amount of work had gone into the presentations and that all present were both interested and thoroughly entertained. The event included a raffle organised by Mr Bruce Fraser (Bursar) that raised money for Alford House and the Mill Hill School’s Microfinance Initiative. We also welcomed an impressive team from Mill Hill County High School.

There was a genuine debate amongst the Lions when deciding which of the teams should be declared the winners and runners-up. Eventually it was announced that the joint winners of the inaugural Lions’ Lair competition are Joshua Jackson (Ridgeway House, Fourth form) and the team of Adam Soning (Weymouth House, Remove) and Jake Beare (McClure House, Remove). Joshua’s idea, Wonderfoods UK, involved developing a range of premium food products suitable for sufferers of coeliac disease. Adam and Jake’s company, Magnetise, was based around an innovative stand for mobile phones and tablet computers. The winners have been offered a range of work experience opportunities and an exciting portfolio investment opportunity.

The first ever Lions’ Lair event found a superb balance between entertainment and education. All the pupils that entered have enhanced their understanding of business enterprise and start-ups. The finalists can draw confidence from pitching to experts in front of a packed audience. They will undoubtedly remember this experience for a very long time.