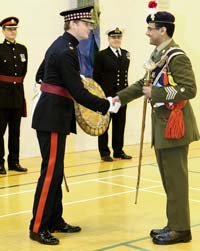 The School’s Combined Cadet Force held its Annual General Inspection on Wednesday 25 April. 2012 is also a biennial review year where formal reports are written at each stage of the chain of command and finally presented to the Brigadier at London District.

The Reviewing Officer was Commander Simon Turnbull, RN, who was welcomed to the School by the contingent’s Commanding Officer, Major Dominic Luckett. The Newcastle Drill Competition was judged by Major Adam Guthrie and RQMS Halliday of the Scots Guards. Owing to the extremely wet weather prevailing on the day, the decision was made to move to a wet weather programme. The Sports Centre proved to be a highly practical and comfortable venue for the morning’s drill competition and parade, both of which provided impressive displays of the cadets’ skill, teamwork and commitment.

Standards in the Newcastle Competition were exceptionally high. As Officer Commanding the Scots Guards’ ceremonial company at Buckingham Palace, Major Guthrie is accustomed to drill of the very highest quality. He was, however, full of praise for the work of each of the teams, many of whom reached standards that would not have been out of place in regular units. In the end, the Newcastle Shield was won by the School House squad led by Drum Major Ashik Patel. Sergeant Phillip Poon, Cedars, was named best squad leader. In the first year for some time, all Mill Hill School houses were represented in the competition and there was also an impressive debut performance by the Mill Hill County High School squad.

The final parade was of an equally impressive standard. Both the victorious Newcastle squad and the Corps of Drums delivered accurate and thoroughly entertaining marching displays and the Corps of Drums ended their musical performance with a superbly crisp routine. Commander Turnbull was visibly impressed and warmly congratulated all the cadets upon their performance as he addressed the contingent at the end of the parade.

Afternoon activities were undertaken by the Army, Navy and RAF sections and included shooting, rope work, first aid, chart work, flight simulation, aircraft recognition and an exciting and mentally demanding teamwork exercise. The activities were mostly planned and conducted by cadets and all were delivered to a high standard.

Commander Turnbull’s inspection report was extremely complementary about the contingent and he was generous in his praise of the attitude and ability of the cadets, NCOs, permanent staff and officers. Such an excellent outcome would not have been possible without the support of those many parents and staff who helped ensure the delivery of such a high quality and rewarding event. We are extremely grateful to the cadets, staff and parents for their hard work and support, and to the inspection parties for their time, care and genuine interest in our contingent.