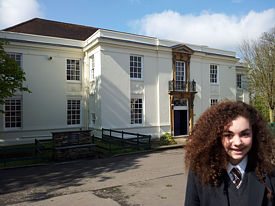 The British Science Association has named a pupil from Mill Hill as the winner of its National Science & Engineering Week online video competition Prove It!

Isabel Gilchrist’s entry into the Secondary School category was originally shortlisted by the public before being judged by a special panel of experts, including Professor Robert Winston, British-born astronaut Richard Garriott, TV scientist Dr James Logan and Dr Yan Wong, presenter of the BBC’s Bang Goes the Theory. The judging panel selected Isabel’s video ‘Are we really standing still?’ as their winner based on how accurate, imaginative and engaging her entry was.

The challenge was laid down as part of the British Science Association’s National Science & Engineering Week 2012, to show an aspect of how our world is in motion in a 30-second clip. The youngster’s winning video explains how the Earth orbits the sun, which moves around the galaxy in an ever-expanding universe.

Isabel (13) said: “When they told me I’d won I was really excited! When I think of all the people that entered the competition I am delighted that the judges chose mine as the winner!”