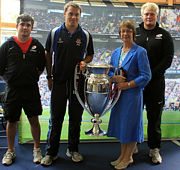 In this week’s assembly we welcomed Saracens RFC along with the AVIVA Premiership Trophy. Alex Austerberry from the Saracens community development team spoke to the students about the ethics and values required to be part of a successful team. Alex spoke of his excitement about the future Belmont/Saracens partnership which will see Stuart Smart from Saracens supporting rugby teams with specialist coaching during games afternoons. After the assembly all pupils were given the opportunity to have their picture taken with the Premiership trophy.