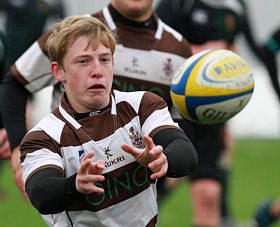 Mill Hill School were lucky enough to play the first competitive match against Watford Grammar School at the new Saracens stadium – Allianz Park – on Saturday 19th January and, in the process create a little bit of history.

The test event, which was attended by supporters from both schools along with Saracens chairman and Old Millhillian, Nigel Wray, who saw the two schools clash at the unique community sports hub.

While other pitches and grounds around the country struggled to play matches in the ice and snow, the artificial turf pitch at Allianz Park offered a fantastic playing surface for the two schools.

It was an extremely closely fought match with both sides looking close to scoring in the first half. Watford finally crossed the line in the second half, but Mill Hill leveled late in the game with fly half and 1st XV captain, Oli Avent breaking through the Watford defence for the touch-down. He converted his own try to make it 7-7. Watford Grammar did manage to squeeze in a last minute try which was converted, winning 14-7.

It was a great occasion that was enjoyed by all and I’m sure will never be forgotten by all those that played.