At the National School’s Championship at Shrewsbury in March the School’s 1st pair of Alex Holmes (Priestley) and Henry Goode (Cedars) got though their group matches with ease but then came up against a strong 1st pair from St Olaves. However they went on to win the Senior Plate competition. 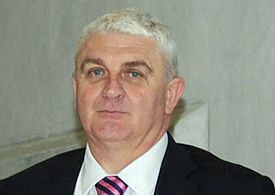 An U14 1st pair consisting of Harry Rapley (Atkinson) and Charlie Plummer (Belmont) reached the last 16 having cruised through the group stages and beaten a Highgate pair in the next round. They eventually lost to a physically strong 1st pair from Rydal Penrhos. The U14 3rd pair consisting of Benedict Balcombe (Priestley) and Dita Jaja (Belmont) won the U14 Plate competition.

Priestley Housemaster, Steve Plummer (pictured), was recently voted “Coach of the Year” by the Eton Fives community and the Old Millhillians were voted “Team of the Year”. Well done to all concerned.