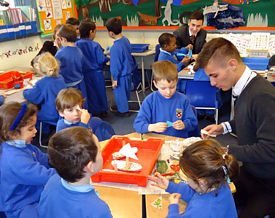 Pupils in the Lower Sixth were given the opportunity to help retain the Eco Schools’ Green Flag Award this year by contributing to the Grimsdell teaching project.

This is the seventh year that this initiative has run and we were very excited to be taking part. Between November and January, small groups of three or four Lower Sixth Form pupils grasped the challenge of planning lessons on Energy which they delivered to Reception, Year one and Year two children in February.

Our aim was to teach the pupils about the importance of renewable energy sources as well as how everyone can save energy. We did this innovatively by developing fun activities, such as building mini wind turbines out of paper to show how real wind turbines give energy or designing stickers to place above light switches to remind their families to save energy. The lessons lasted 30 minutes with each session filled with new and interesting activities; what was most gratifying was that both the Mill Hill pupils learnt just as much as the Grimsdell pupils did! We delivered two lessons to the same class so we got to know the pupils very well, which was great.

After both lessons have been given, Sophie Park, Yasmin Powe and Molly Duncan led an assembly for Grimsdell pupils to present certificates for everyone who took part and Eco prizes to each of the classes we taught. Overall after teaching about sustainable energy to the pupils of Grimsdell, we’ve enjoyed the experience and hope to do it again soon.