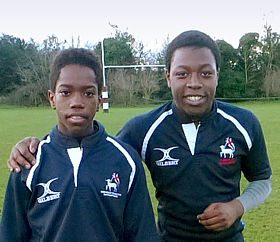 With Rugby over for another season at Belmont, two of the school’s leading players finished the term on a real high. Dita J and Tobi S represented Belmont, in the south east of England Prep schools Barbarians team. On Sunday they played Rhonda Schools XV at Shiplake College. Both boys were outstanding and should be proud of being selected for such a prestigious team. Dita made some excellent runs against a physical opposition and Tobi was solid in defence and rounded off a wonderful season with two excellent tries. Well done to both boys on an outstanding achievement. The previous evening Dita had wowed the audience when he performed a Rachmaninoff piece on his cello at the Belmont Centenary concert.