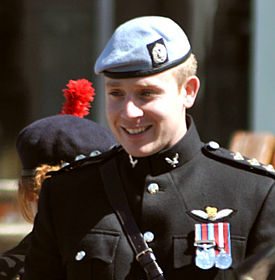 The Reviewing Officer was Old Millhillian Captain Philip Wilson AAC (McClure 2003) who was welcomed to the School by the contingent’s Commanding Officer, Lieutenant-Colonel Dominic Luckett. The Newcastle Drill Competition was judged by Warrant Officer (RSM) Fritz Albrecht. Due to the excellent weather, the parade took place as planned on the Quad with guests from both Mill Hill and Mill Hill County High Schools.

Turnout for the Newcastle Competition was high with 11 teams taking part. The Newcastle Shield was won by the Ridgeway House squad ably led by Cadet Joshua Jackson. This is a particularly significant achievement as the last time Ridgway won was 1962. Leading Hand Holly Gibbons was awarded best squad leader. 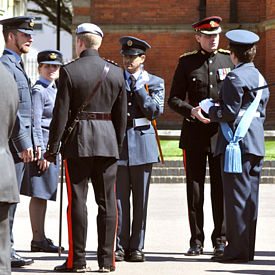 The final parade was of an impressive standard. Both the victorious Newcastle squad and the Corps of Drums delivered accurate and thoroughly entertaining marching displays and the Corps of Drums ended their musical performance with a superbly crisp routine. Captain Wilson was visibly impressed and warmly congratulated all the cadets upon their performance as he addressed the contingent at the end of the parade.

Afternoon activities were undertaken by the Army, Navy and RAF sections and included shooting, rope work, first aid, chart work, flight simulator, mast assembly, field craft, canoeing, skill at arms and Bosun rigging. The activities were mostly planned and conducted by cadets and all were delivered to a high standard.

This year’s AGI was hugely successful and portrayed the Contingent in a very positive light. Such an excellent outcome would not have been possible without the support of those many parents and staff who helped ensure the delivery of such a high quality and rewarding event. We are extremely grateful to the cadets, staff and parents for their hard work and support, and to the inspection parties for their time, care and genuine interest in our contingent.