For the second year running, our 1st XI cricketers have been crowned Middlesex County Champions beating St Benedict’s Ealing in the final. In other cricketing news the U15s made it to the finals of the Middlesex 20/20 Cup, and both India Whitty and Sophia Dunkley have been selected for the England Women’s Development Programme for U15s. 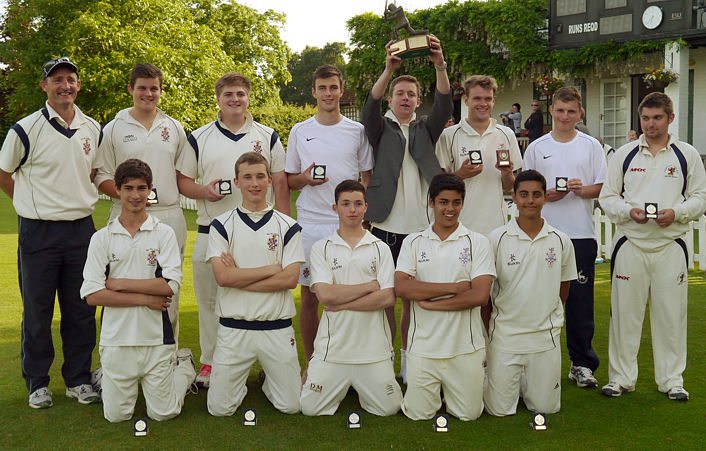 On 2nd July, our U15 pairing of Mizuki Sakurai and Phoebe Dart won the Asbury Bailey Shield at the Independent Schools’ Tennis Championships at Eton. The girls beat St George’s 6-0 6-2 in the final – a resounding victory and the first time our girls have ever reached this stage of the competition.

The Girls U15 Tennis Team (Mizuki Sakurai, Phoebe Dart, Sophie Tingle and Sophie Maihoefer) are Middlesex Champions, having competed in the Aegon Year 10 Schools Tennis Tournament. We started by playing three schools in our group where we had convincing wins over JFS (12-0) and Orleans Park (8-4). In a very competitive match against St Pauls, we just clinched the win through brilliant play by Mizuki and Sophie, having won the deciding championship tie-break 10-8.

This meant we progressed to the semi-final where we had success against St Helens, Northwood where we won 12-0. The final was played against St Pauls who we had previously narrowly beaten in our group stage. However, we all played more consistently this time, winning both of the doubles and three out of four of the singles, making us Middlesex champions. This has been a great achievement for everyone involved and we look forward to the regional stages of the competition which will commence in September.

Our golfers have also had a very busy and successful fortnight winning the ISGA National Schools Plate Championships with 16 year old Rishi Khiroya being individual winner on the day. Priya Pankharia came second in the South of England Championships and this week became Middlesex U18 Ladies Champion.