Old Millhillians in the News

What a diverse bunch Old Millhillians are. Recent weeks has seen media attention for alumni on the sports field, in medical research on overseas aid project and on the television screen. 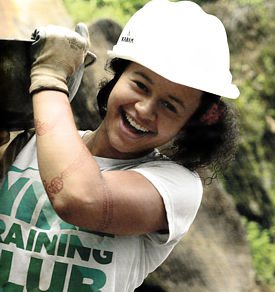 Dr Marc Dweck (Senior Monitor, McClure 1997) has been featured on BBC Radio and Television News to talk about recent research at the University of Edinburgh dealing with the early identification of people who may be as a high risk of heart attacks. Click here for more.

Recent leaver Leanne Armitage has been featured in the TES Magazine (8th November) in a report detailing the achievements of a group of teenagers working on a building project in Kamoda, a remote village in the Western Indian state of Rajastan. Leanne, who is pictured carrying a load of rubble, had this to say about her contribution to the Virgin Atlantic Free the Children Project “If you can choose something you’re passionate about, the impact is going to be a lot more effective”.

We recently reported on Harry Melling’s success in the West End hit play “The Hot House” but in recent weeks it is Harry’s Grandfather, old Millhillian Patrick Troughton, who has been in the news. 50 years on, there has been much debate about the relative merits of the various Dr Who incarnations. In the Times Saturday Review (16th November), David Aaronovitch is clear that Troughton gets his vote “His greatest glory was a marvellous voice – like a knife spreading buttered gravel”.

In the Independent (11th October), it was reported that archivist Phillip Morris had uncovered classic Troughton episodes from the 1960s that had been lost for 45 years. The episodes are said to “burst with the energy of the Sixties” and are available on Apple downloads.

The School has also been the beneficiary of a selection of Dr Who novels kindly donated by Dr Who enthusiast David Dovey. David has been blogging about his project which was set up to inspire children as to what can be achieved through courtesy, communication skills and teamwork. Click here to see his blog.