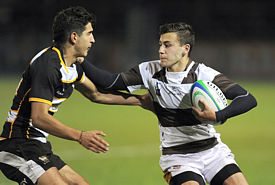 Wednesday 16th October saw the inaugural game for the Todd-Raphael Salver, played between the First XV’s of Merchant Taylors’ School and Mill Hill School at Allianz Park, home of the Saracens. The game was a keenly contested affair with MTS gaining a deserved 3 – 0 lead after an impressive start. However, a highly motivated Mill Hill side then started to win the battle of territory. With this territory, points and much-needed confidence began to grow for the Mill Hill side. Man of the Match, Lewis Leader, drew the sides level with a penalty, before finishing off an excellent team try and adding the conversation.

After half time, the Mill Hill forwards began to dominate proceedings and were unlucky not to add more points before the excellent Christos Theodorou touched down from a well-executed driving maul. Leader added the extras from wide out. With the forwards dismantling the MTS set piece, the back line began to look an ever increasing threat. The highly impressive Raph Levy was dangerous throughout and Harry James was a constant thorn in the side of MTS. On the rare occasions that MTS won quick ball, the midfield defence of Mill Hill, led by Alex Conn and Guy Woyda, proved an intensely destructive force.

The win was secured by the an outstanding solo effort from Leader who again converted his own try, giving him a personal tally of 19 points in his team 24-3 victory. The main event was preceded by an U16 fixture between the two schools. This resulted in a hard fought victory for a very talented MTS side by 15-3.

The evening was hugely atmospheric and a fantastic occasion for all involved; I have little doubt that it will be a high point of the season for both schools for many years to come.