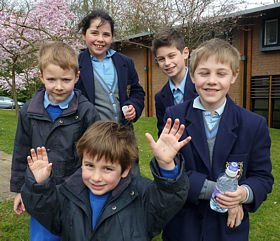 As part of National Science Week, forty-seven Year 1 pupils were invited over from Grimsdell to Belmont where they were asked to join in a science experiment by the Year 5 pupils; all part of developing Year 5 leadership skills.

The task was to attempt to make a rocket (film canister), powered by Alka Seltzer tablets mixed with water, shoot as high into the air as possible. The ‘fuel’ mix could be adapted in any way Year 1 pupils thought would work best and our obliging Year 5 pupils would listen to their ideas and everyone would test them out together, such as adding more or less water to differing fractional amounts of tablet.

Much fun was had by all and, judging by the smiles and whoops of excitement, Year 1 and Year 5 had a highly engaging and enjoyable morning. Watch out Mars, Saturn, Neptune and beyond – our future scientists at the tender age of 6 and 10 are already preparing for even deeper excursions into the universe!