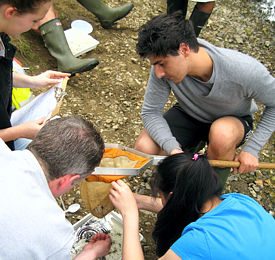 The Lower Sixth enjoyed a 4 day trip to Juniper Hall in Dorking to expand their knowledge of ‘Investigating Populations’. The weather was extremely kind to us, meaning that all the planned field work was bathed in sunshine. We collected some of our best data for mark-release-recapture, giving an accurate estimate of the population of rams horn snails. We trapped 5 bank voles, named them and released them once we had examined their specialised features which make them excellent crepuscular animals (watch the video clips to see how to set a trap and watch them being released). We also dissected Holy leaf miners to estimate the number who survive to maturity compared to the number laid. We have developed skills in statistical analysis of population data. In amongst all that we also managed to watch some World Cup Games.