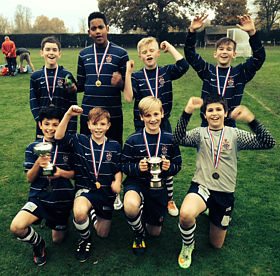 After qualifying from the regional finals, Belmont attended the ISFA National six-a-side Football Finals at Chigwell School. With the competition consisting of the very best schools from across the country, Belmont knew they would have to be at their very best to contest the silverware. Opening wins against Elstree and Holmwood House were encouraging. In the third match the boys were taken back down to earth, losing narrowly to Great Walstead. However, this defeat seemed to ignite to fire in the team and they responded by winning their final 2 group matches with an outstanding performances against Millfield and edging a 1-0 win against Summer Fields. The boys qualified as winners of their group and faced one of the tournament favourites Dulwich College in the semi-final. The boys were not put off by the task that faced them and produced a wonderful display of football to narrowly win 2-1.

By now the boys were in full ascendency and also brimming with confidence. In the final they once again faced Summer Fields but this time the stakes were high with the winners being crowned national champions. Belmont dominated proceedings from the first to the last minute. 4 goals from striker Alfie topped a fine team performance as the boys left their opponents shell shocked in a complete 4-1 victory. Captain Finn proudly lifted the trophy and Belmont’s name now sits deservedly amongst some illustrious previous winners.