On the 11th March 2015, 64 eager Year 3 pupils set off on the inaugural Year 3 trip to the British Museum. Their excitement was based on the day that lay ahead, where they were going to get the opportunity to get up close to some of the most impressive artefacts that define time of the Ancient Egyptians and the Ancient Greeks.

With activity booklets in hand, they started their day in the British museum by venturing back to the world of Ancient Greece. Activities ranged from hunting for nuggets of information hidden in glass pottery exhibits to sketching the impressive Netheid monument. 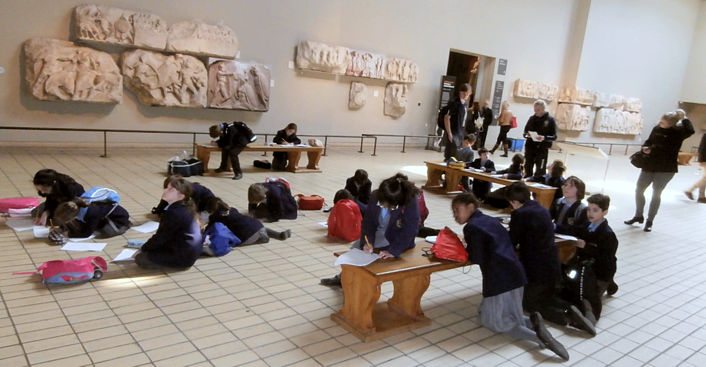 It was safe to say that, after two hours being immersed in the World of Alexander and visiting the Parthenon, children and staff alike were ready for a well-deserved break and the Belmont contingent enjoyed a relaxing lunch in the beautiful English sunshine.

The afternoon session was to prove the most exciting, as the children came face to face with some of the impressive artefacts that define the age of the Ancient Egyptians. Groups moved from searching for the elusive statue of ‘the Boy King’ to examining the beautiful hieroglyph inscriptions on a sarcophagus or tablet, all the while remaining respectful and mindful of the general public who too wished to enjoy the exhibits. It is true to say that a highlight for the children was coming face to face with the mummies, with the children finding themselves engrossed in the details that accompanied the funeral rites of this ancient civilisation.