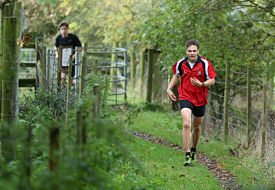 Well over 300 of the School’s pupils ran for their House in the House Cross Country races this week. The most thrilling highlight was the uphill tussle for the line and first place in the Senior Girls race where Phoebe Dart (M) just pipped Carlota Franques (Mc). Ed Goode (Cd) ran an outstanding race to win the Senior Boys race which is over a gruelling 3.2 mile course. His victory marks the second successive year a Fifth Former won this and it was only two years ago his elder brother, Henry, won the same race (and only 19 seconds faster). Maybe Ed might challenge Joe Sherry’s course record by the time he reaches the Upper Sixth? Team honours in the Senior races went to School House for the Girls and Atkinson for the boys.

In the Fourth Form Sophie Jung (C) won the girls race and Thomas Jones (S) took the lead from the beginning and ran a very strong race to win 1st place. Weymouth took the team honours. Kimberley Balcombe finished 6th overall and 1st amongst the girls in the Remove race. Meanwhile Isaac Clark (Cd) and Archie Craddock (S) both battled it out throughout the entire race before Isaac held out for the win. The team honours went to Cedars.

Thanks to remarkable consistency over the Fourth Form, Remove and Senior Girls races, School took back the Overall House Cross Country Shield for the first time since 2009.