Ethan Bamber (Murray) was selected to bowl to Middlesex players before a championship match at Lords this week. Coached by Angus Fraser, Director of Cricket at Middlesex, Ethan rose to the challenge, and was not fazed even by bowling to the current England opening batsman, Sam Robson. 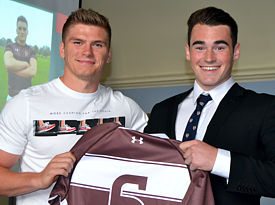 The 1st XV were recently awarded their 1st team shirts by Saracens’ England and British fly half, Owen Farrell, at our annual shirt presentation evening. Attended by parents, coaches and players, the event was a great success and provided an opportunity to wish Captain Oliver Motisi (Atkinson) the best for the coming season.

OM’s in the News

Old Millhillians continue to thrive on the rugby pitch, none more so than Mason Caton-Browne who has recently been signed from the London Broncos after an impressive first season with the Rugby League side. Mason will be in school on Wednesday 1 October to coach the 1st XV and to share the secrets of his success. The 21 year-old recently left his hometown club to join Salford and has helped the Red Devils to victories in his first two appearances, scoring three tries in the process.

From L to R: Ethan Bamber, Angelo Prodromou on the podium and Mason Caton-Brown

Fourth Form pupil Natasha Philiastides (Cedars) has been invited to be part of the England U18 Talent Development Squad, a particularly impressive achievement given that she is only 13 years old. She trains with and competes for Barnet Copthall Swimming Club.

Aspiring motor racing driver, Fifth Form pupil Angelo Prodromou (Cedars), recently took part in The London Cup, a prestigious karting event, at Rye House track in Hoddesdon. He achieved a third place podium finish in the final and also won the trophy for fastest lap of the weekend. This is a major, annual karting event that will be televised in the near future.

Another Successful Year for A-level and GCSE Results

This has been a particularly successful year for A-level results achieved by pupils at Mill Hill School, with 45% of entries being awarded A*/A grades and 76% of entries A*-B. Mill Hill School has seen a steady increase in the A*/A pass-rate in recent years, despite national trends. The vast majority of our 2014 leavers are now looking forward to taking up their places at university, with 70% being admitted to institutions that are members of the prestigious Russell Group.

Our leavers are going on to study a wide variety of subjects, including Law, Mechanical Engineering, Architecture, Economics and Finance, Mathematics, History of Art, Product Design, Biological Sciences, History, English Literature and French. We are especially delighted for three members of the class of 2014 who are going to study medicine, William Alton, Daniel Jacobs and Raphael Levy, as is Leanne Armitage who left the School in 2013 and spent part of her gap year working on a building project in Rajastan.

At AS Level this has been the best ever year, with 61% of passes at grades A/B and 38% at grade A. Twenty-five pupils achieved three A grades or better and with special congratulations due to those who achieved A grades in all subjects: Stefan Bartel-Taverner, Daniel Cohen, Jacob Locke-Gotel, Sophie Loizou, Alexander Matraxia, James Myers, Chloe Noble, Joseph Ragona, Rakulan Santhakumar, Laura Slade, Lirong Wang, Eliza Welch, Shuxian Yan.

Congratulations to this year’s GCSE candidates, many of whom achieved excellent results. Approaching half of this year’s cohort achieved six A*/A grades or better, with 22 candidates securing nine or more of the top grades.