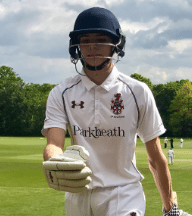 Current Upper Sixth Josh Drage, has returned to school after a wonderful cricketing summer. Josh who joined us in the Lower Sixth last year on a Sports Scholarship enjoyed a breakthrough Summer. He played an instrumental role in helping the 1st XI have a great season which consisted of 11 wins from 13 matches and included a wonderful victory against the MCC. Highlights for Josh included his first ever innings of three figures when he scored 104*, two 70s and two further scores of 50 to become the 1st XI’s top scorer. He also amassed a great haul of runs for Bucks Academy during the Summer holidays, which included a further 2 fifties, 2 more seventies and a personal highest score of 216* against Hertfordshire. Without doubt Josh has benefitted from the amount and level of coaching he has received. In addition to the 3 squad sessions enjoyed each week in the Summer Term and the two, one to one sessions he has received each week from our Head of Cricket Sanjay Patel throughout the year. He is currently taking a well-earned rest from cricket for six weeks (whilst pulling on a 2nd XV shirt instead), but reassures me that he will be back in the indoor nets after Autumn Half Term.