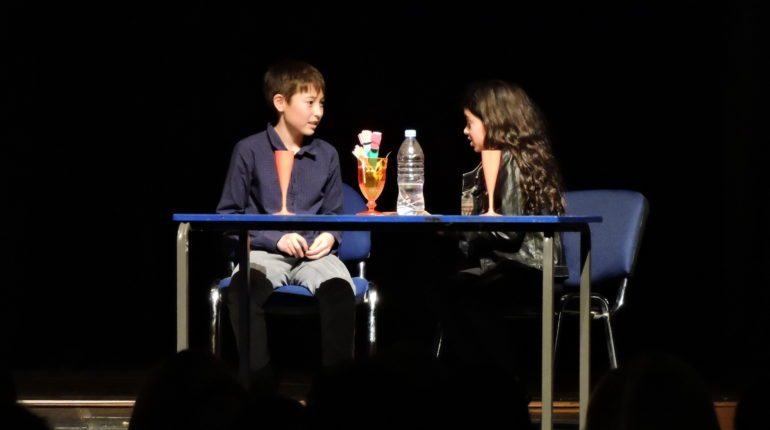 Last night the annual Year 7 House Drama plays took place, this time in The Large at Mill Hill School. With just a few days of rehearsals the children had limited time and space, but they managed to pull it off! Each house put on a great performance and really got into character!

Jutes:  Murder in the Room

Danes: “I Must Apologise, I’m British”

The Judges (Two Belmontian Pupils) found it very difficult to come to a decision as they loved aspects and characters from each of the plays. However, there could only be one winner… DANES!

“I Must Apologise, I’m British” by Libby Russo!

The year 7 house drama was set to be a very tough production to direct as it involved more pupils than ever before. However, fear not, the Danes were in the talented hands of Mrs Russo and Mrs Sulkin. The play was set in a British Fish & Chip shop and was based around various stereotypical British characters; it was both very funny and informative. Noah Keller picked up best actor for his convincing role as a ‘Northerner’ with a love for biscuits, tea and flat caps. Charlie Graville had the audience in stitches starring as a city worker moaning about the daily commute and queue jumpers. His mannerisms and comic timing were superb. Charlotte Dulcken really shone during the evening as she starred as an annoyed, hungry teenager. All of the Danes involved contributed to what was a fantastic performance. Danes is very proud to have won this event and the pupils thoroughly deserved the accolades that they received. I would like to thank Mrs Russo for directing the play with support from Mrs Sulkin and also Mr McGuiness who helped out with many of the props that were used.