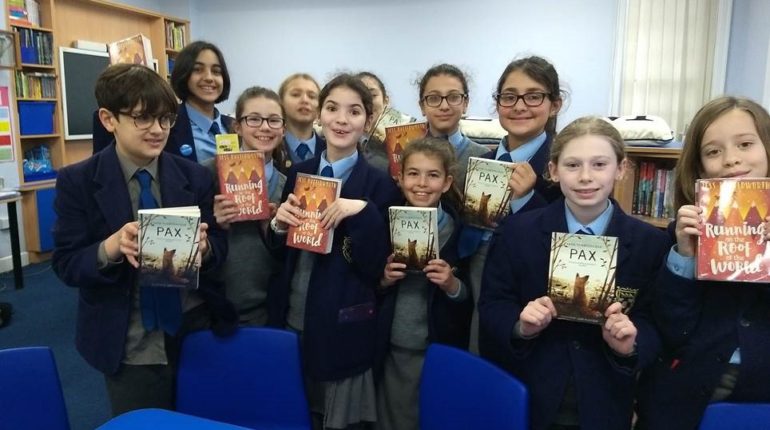 Upper School Book Club have started 2018 with a paired reading challenge: the group split in two to read different titles, then swapped over!

Eleanor, Maya, Romina, Ruby, Tillie and Tabitha have just read Pax by Sara Pennypacker, with illustrations by Greenaway-winning Jon Klassen. Eleanor says “it is about a boy called Peter who tries to find his best friend, a fox called Pax. Peter’s father made him leave Pax in a forest because Peter was going to live with his Grandfather (who didn’t like animals) while he was away going to war.”

Romina says “Pax is about a boy and a fox who are inseparable. My favourite character is Peter because he is resilient, and my favourite part is when Peter goes looking for Pax.”

Eleanor gave a very detailed review, saying “My favourite character was Pax, because throughout the book he never gave up hope that his boy would come back to him and although he was the runt in the family, he was the only one who survived”.

Praniv, Diana, Rhianna, Amelie and Gracie read Running on the Roof of the World by Jess Butterworth, illustrated by Rob Biddulph. The story follows Tash, a young girl who has to follow many rules to survive in Tibet, a country occupied by Chinese soldiers. But when a man sets himself on fire in protest and soldiers seize Tash’s parents, she and her best friend Sam must break the rules. They are determined to escape Tibet – and seek the help of the Dalai Lama himself in India.

Praniv says “Tash’s parents have been captured by soldiers, so she goes to the Dalai Lama for help…. my favourite character is Sam because he is quirky. My favourite part is when Tash is in the vulture tree!”

We received these wonderful books in the Booktrust Book Pack, which is available for free to all senior schools. Thank you, Booktrust!