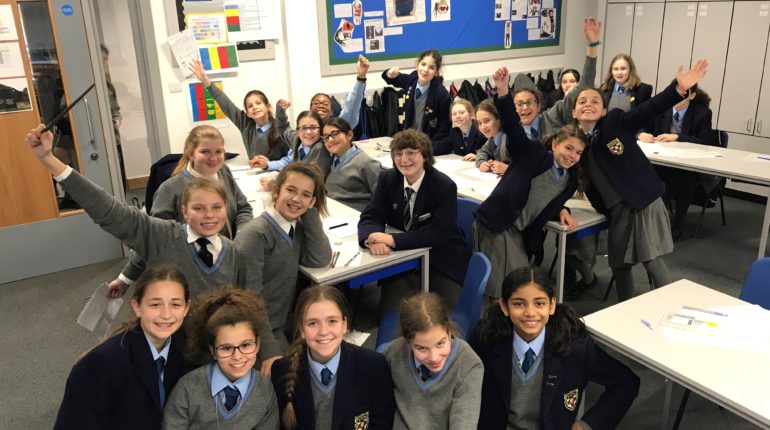 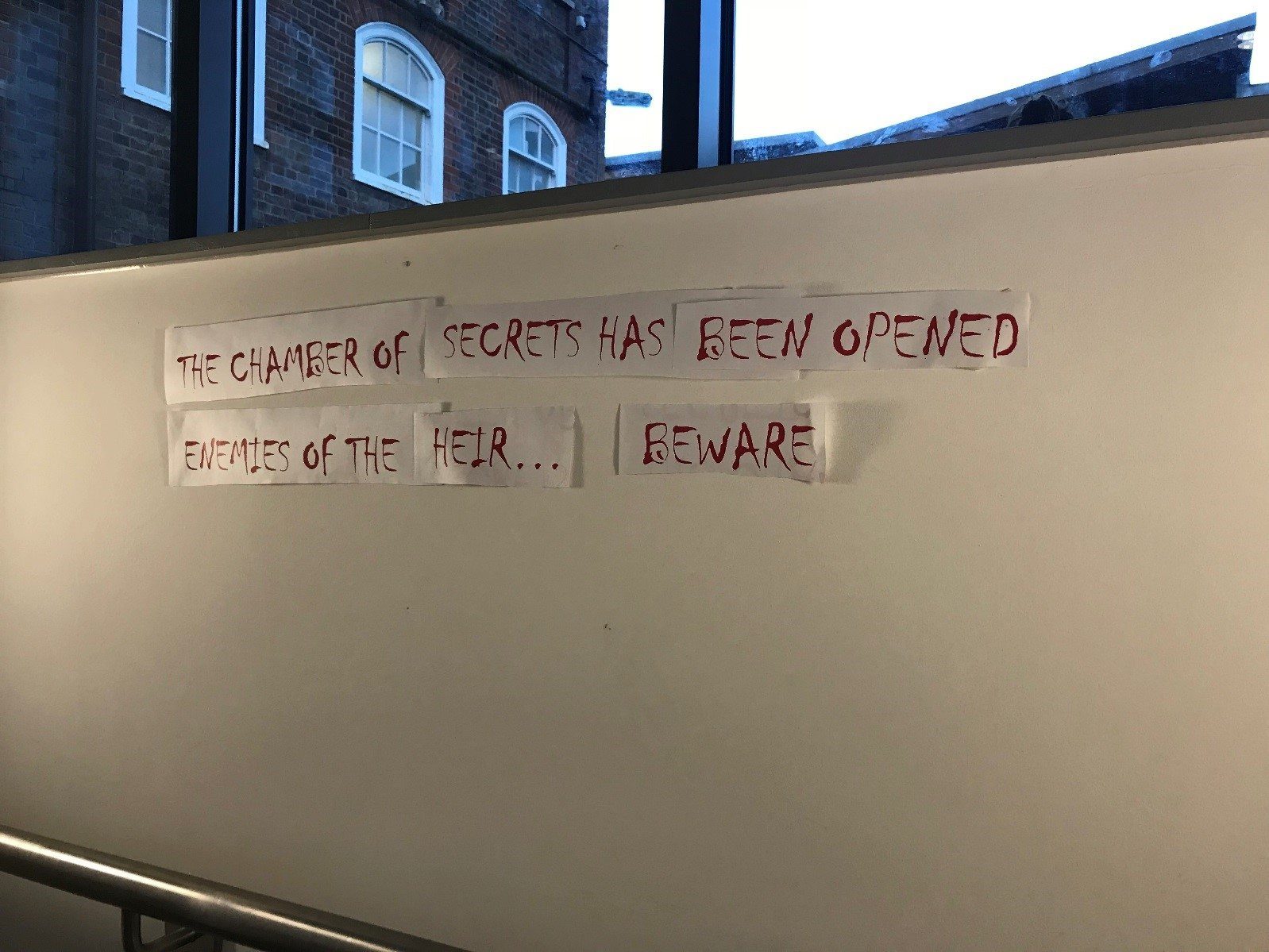 “Of course it is happening inside your head, Harry, but why on earth should that mean it is not real?” –The Deathly Hallows

It was a cold and rainy Thursday in February, and Harry prayed for it to be lunchtime, so that he could go back to the warmth of the Gryffindor Common Room. As soon as Professor Sprout’s cheery voice dismissed them, he hurried in the direction of the crimson tower, robes fluttering behind him.

As he approached, and was met by the sweeping electronic hum of automatic doors, Harry had a peculiar feeling that something had changed. Instead of the normal red carpets and elaborate tapestries, the walls seemed to be covered in letters and the floor was now a rather dashing shade of slate grey.

“By Hedwig, what has happened here?” he thought to himself, as he rounded the corner and came face to face with a much-improved, blonder version of Moaning Myrtle. “Excuse me… could you tell me where I am? I thought I was in the Gryffindor Common Room, but things look rather different.”

“Why, Harry,” replied the charming, bespectacled witch, “you’re in the Roger Chapman Building, of course.” 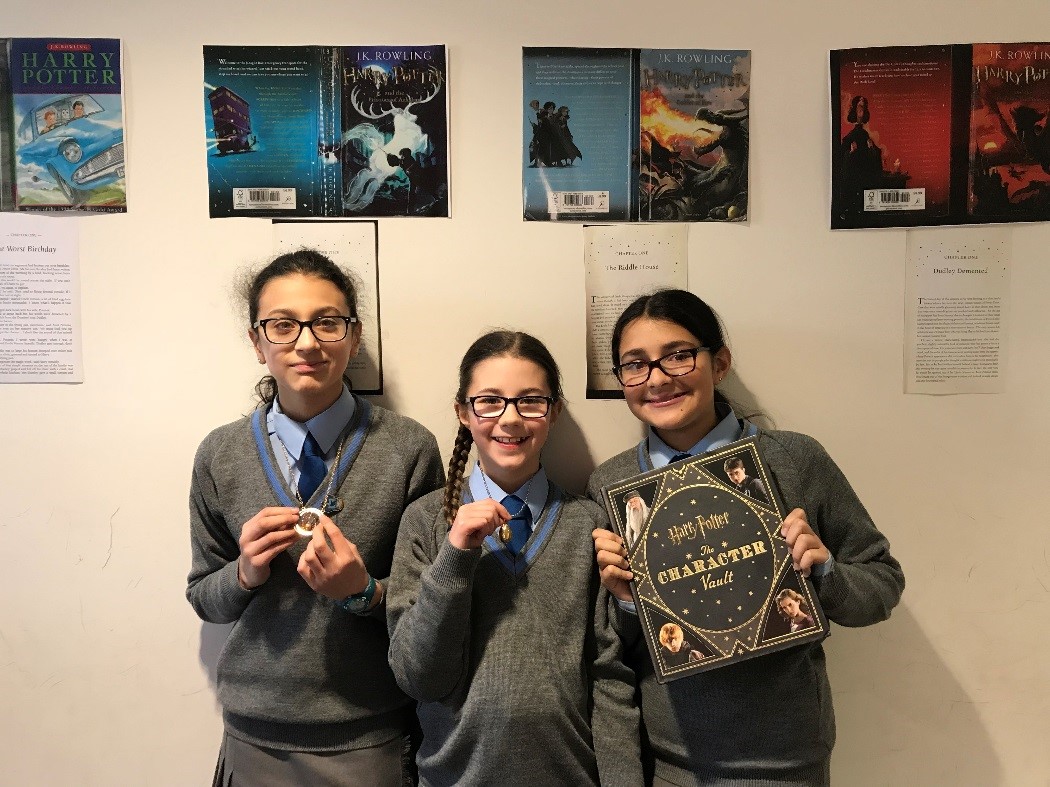 Last Thursday, it was ‘Harry Potter’ Book Night: a day dedicated to celebrating the imagination and magic of ‘Harry Potter’. All forms received an owl post invitation first thing in the morning, explaining where and when the fun would be happening throughout the day.

Lower School pupils went to the Library at lunchtime for colouring-in fun, a ‘Create Your Own Fantastic Beast’ activity, a trivia quiz and – most excitingly – the chance to hear Miss Greaves reading aloud from the first book, ‘Harry Potter and the Philosopher’s Stone’. 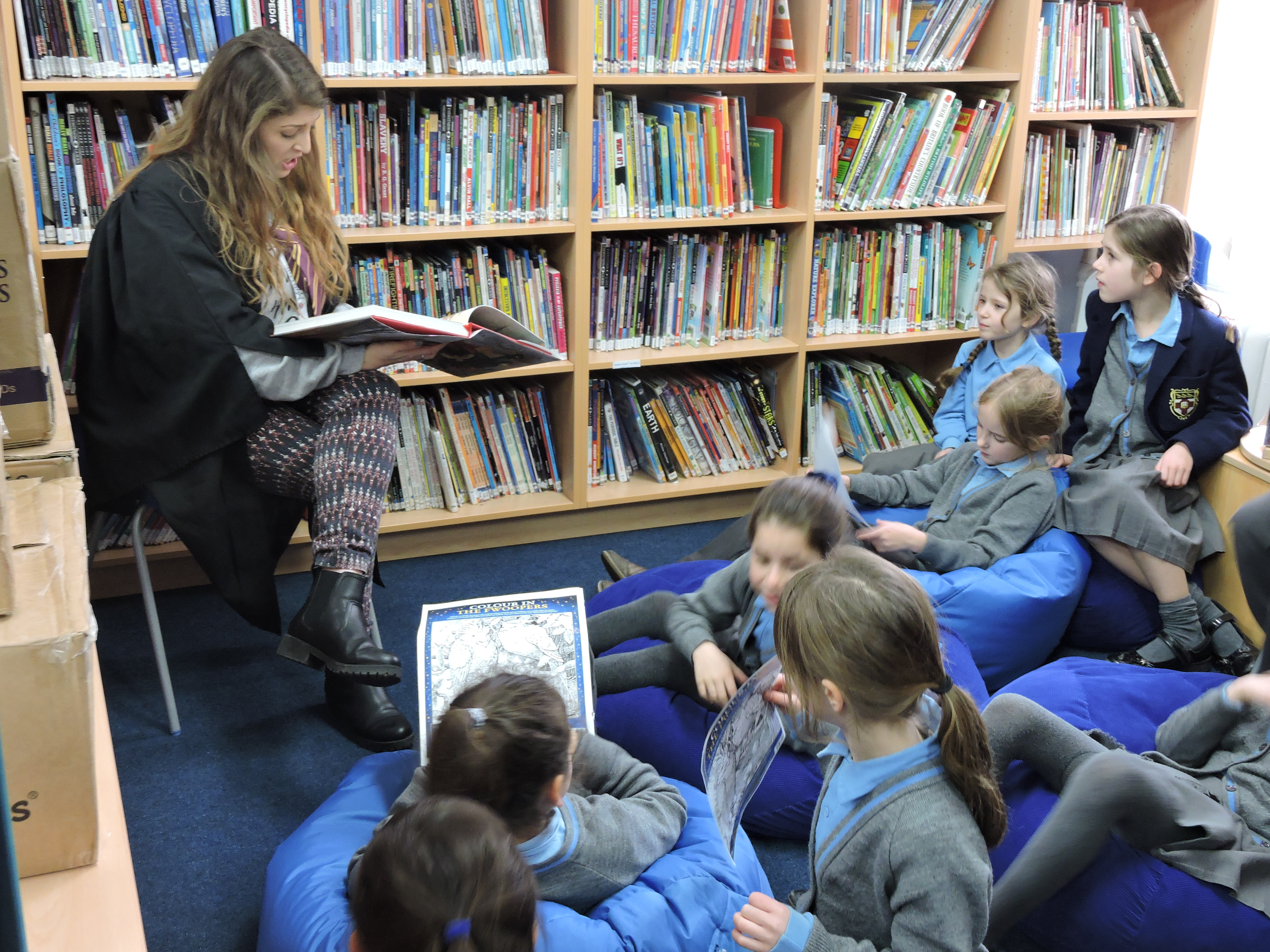 During English lessons, students in Upper School had the opportunity to do a range of activities in response to J. K. Rowling’s texts and ideas: from role play, to creating their own Hogwarts House and shield, to becoming a Daily Prophet journalist. All students fully embraced the creativity and complexity of Rowling’s ideas, and produced many thoughtful and inventive pieces. 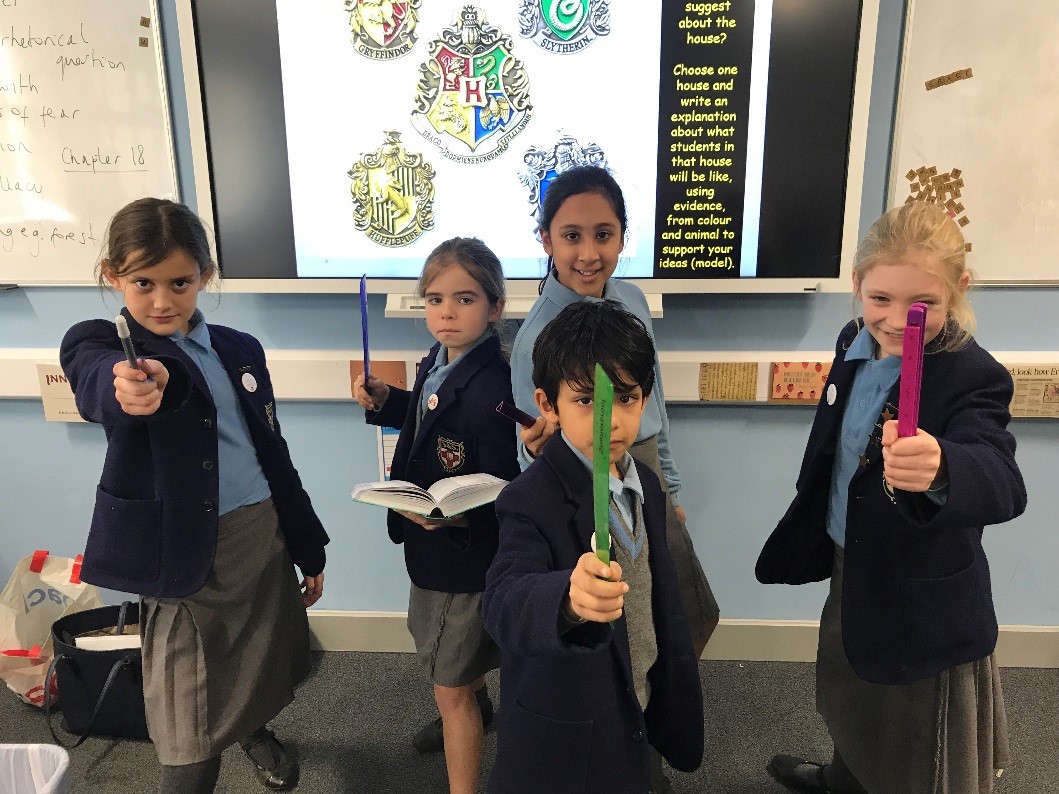 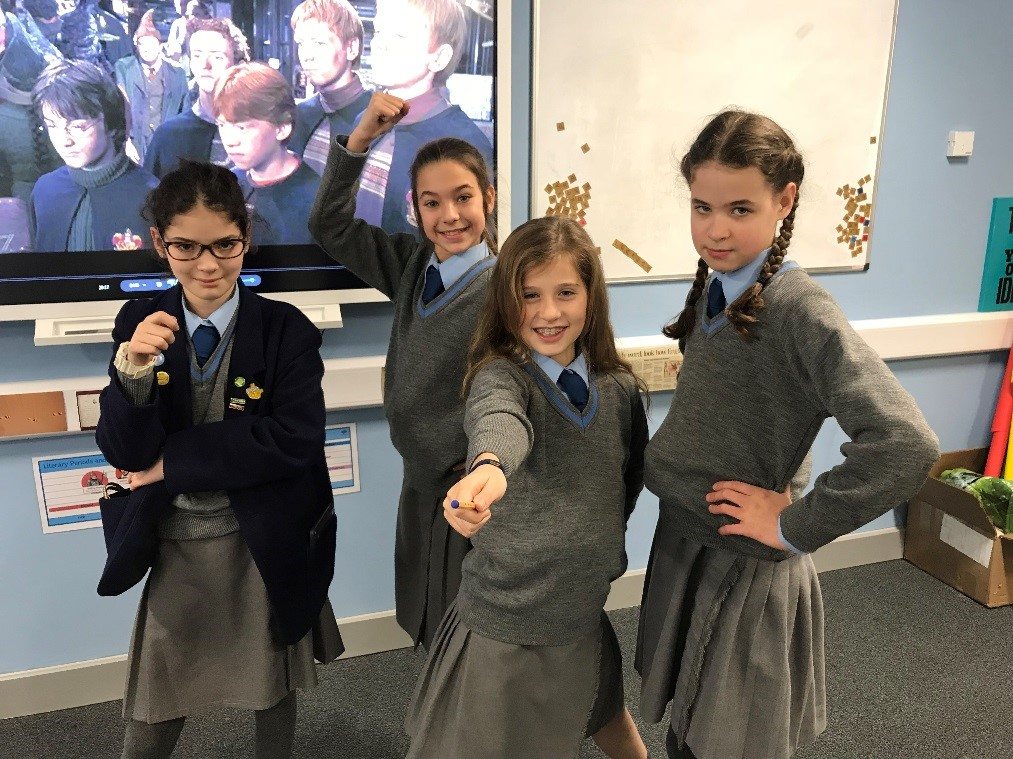 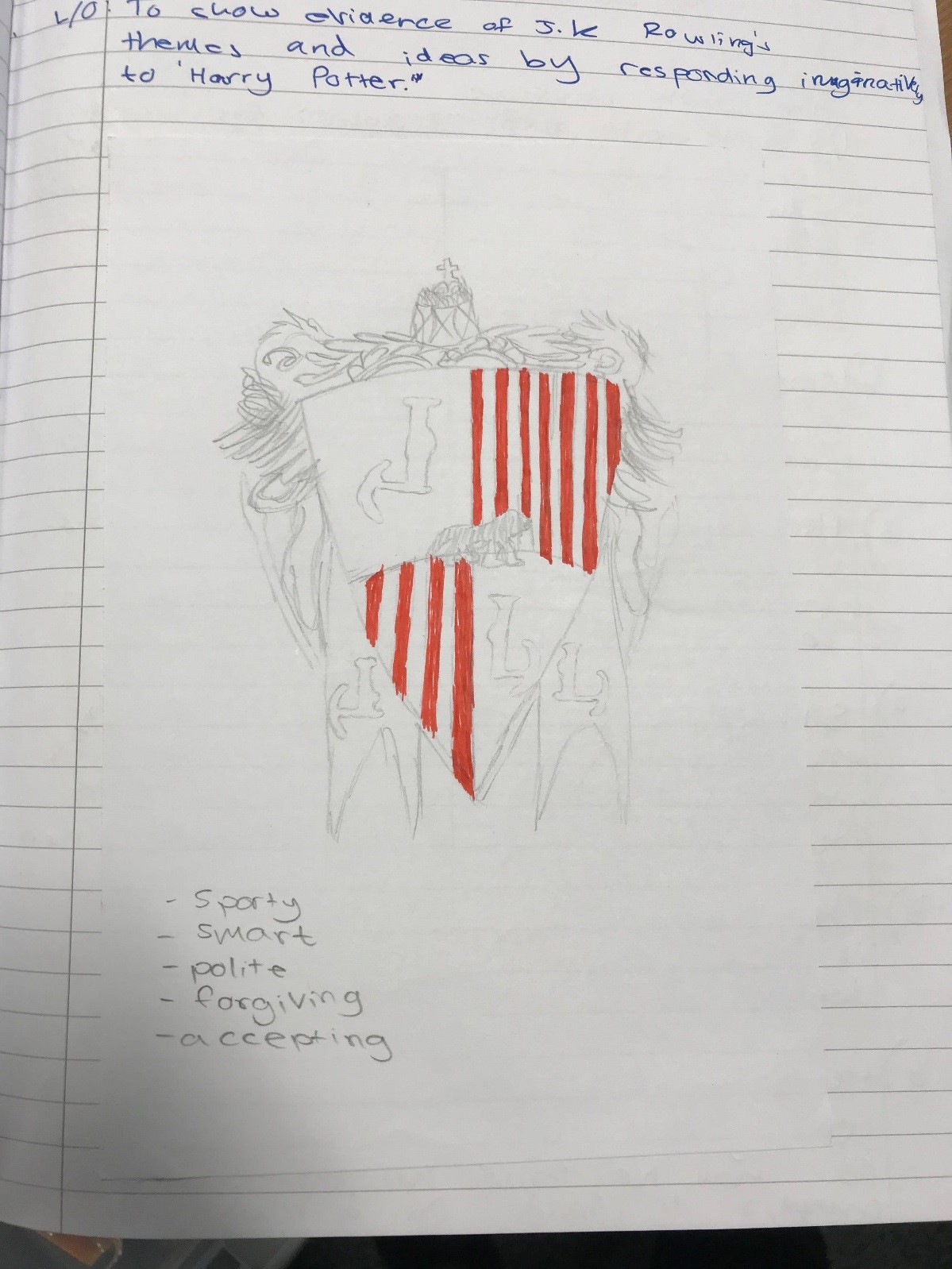 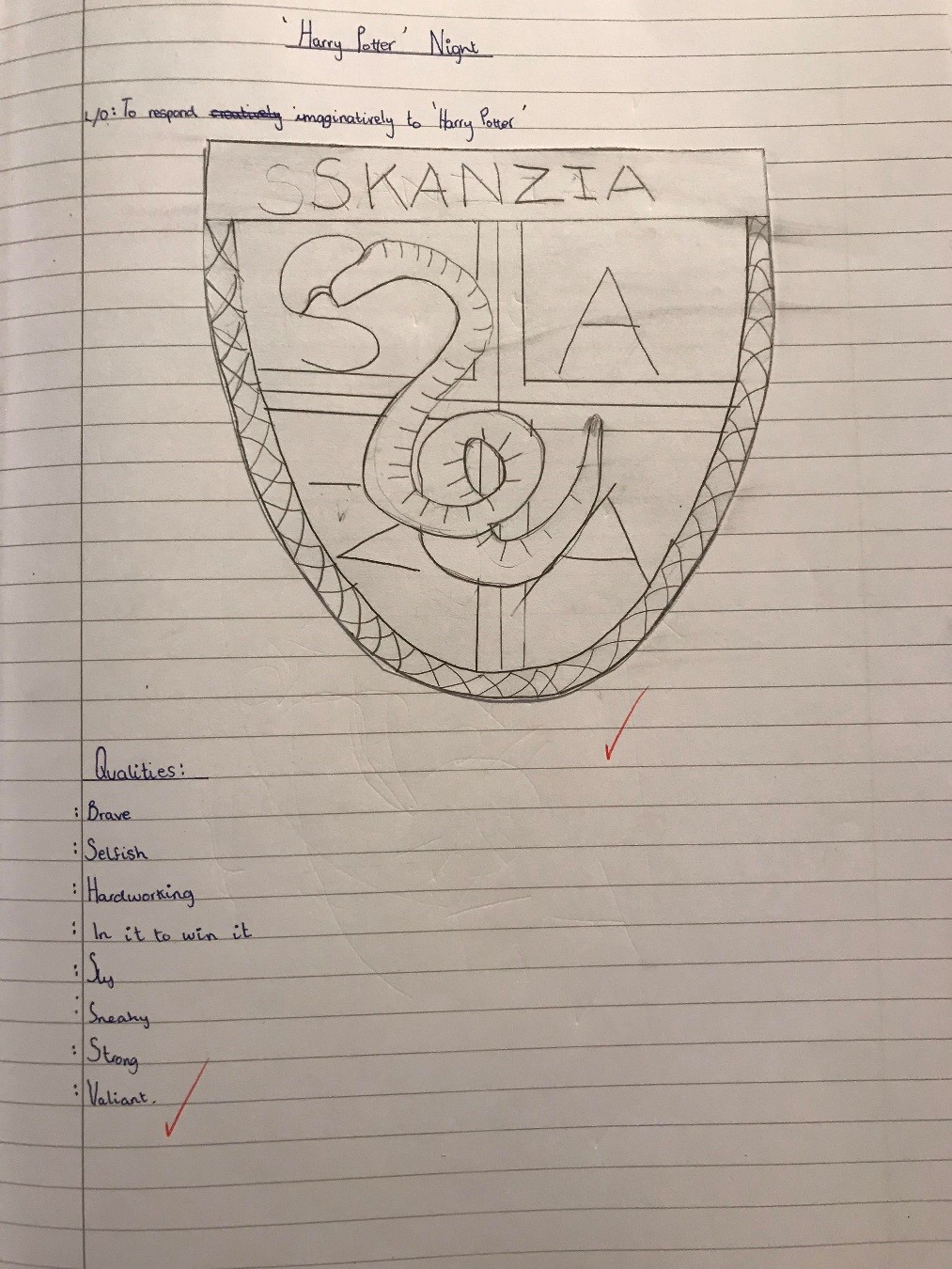 Additionally, at break time and lunch time, the upstairs of the Roger Chapman Building was transformed, by the wonderful Miss Greaves, into the House Common Rooms and students were invited to absorb themselves further in the magical world. Mr McBurnie’s room, Hufflepuff, became the Pinewood Studios of Belmont, showing different Warner Bros adaptations of the stories. Miss Ali’s room, Gryffindor, became a workshop for creating your own magical beasts. Congratulations to Katya Yushkina and Sophia Safin for winning the competition with their imaginative amalgamations below: 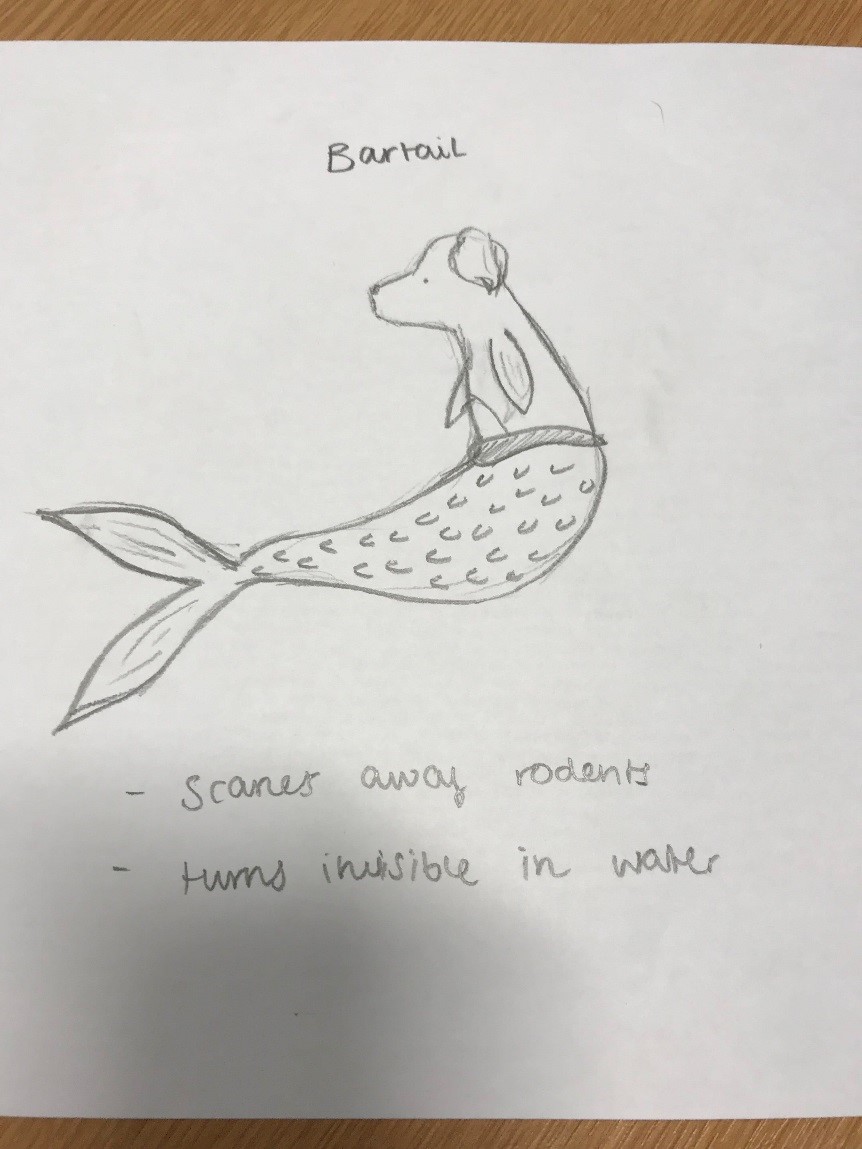 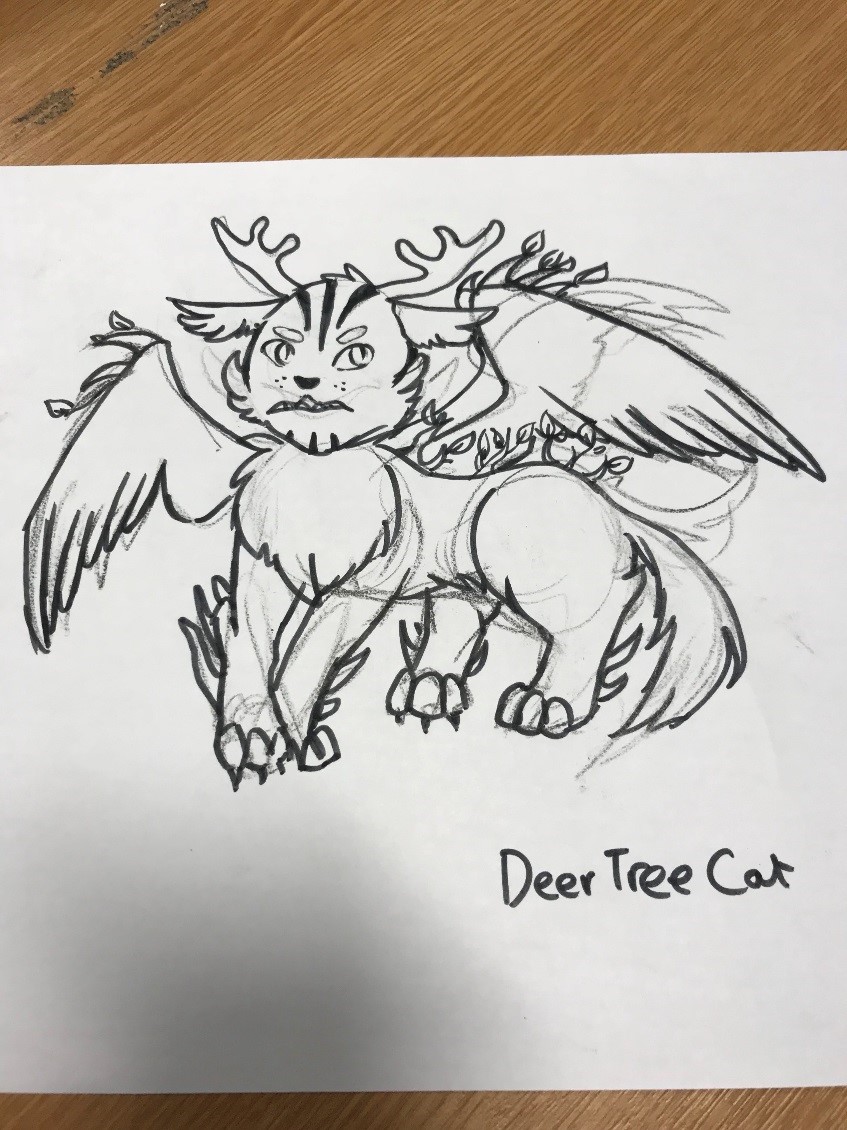 Miss Bufton’s room, Ravenclaw, was a tougher one to crack, with riddles galore to challenge students before entering. Once inside, students were rewarded with a variety of ‘Harry Potter’ trivia, wordsearches and creative design activities. 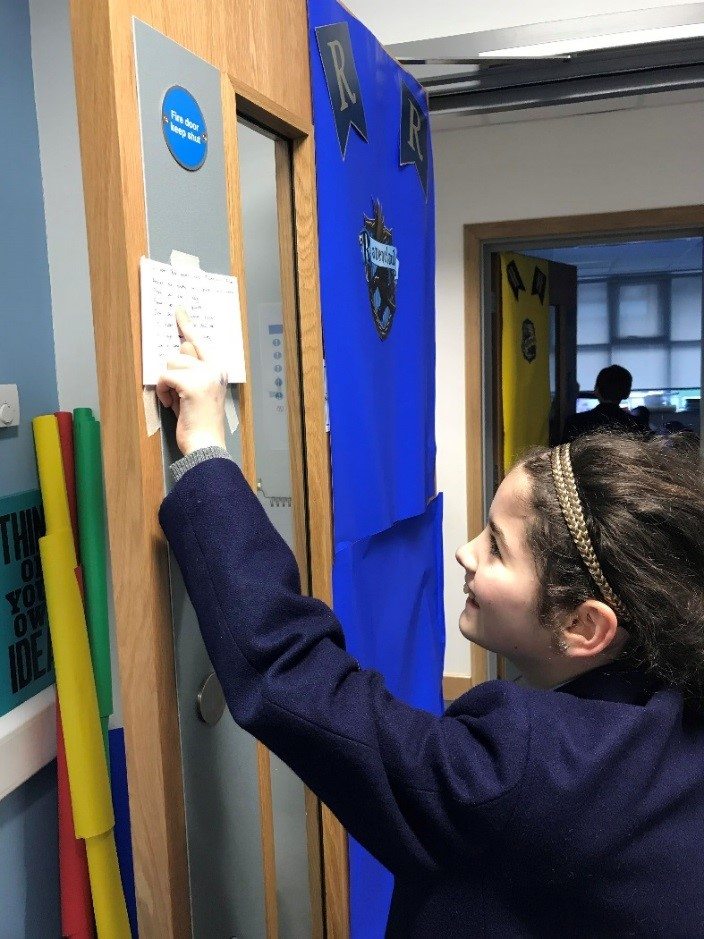 I am more powerful than God

More evil than the devil

The poor have me, the rich want me

If you eat or drink me you will die.

Green as a snake, I slither along

Can you guess what I am?

All students avoided the girls’ bathrooms, from where a distinct moaning could be heard all day, to prevent risk of flooding and escape the much-feared Basilisk. 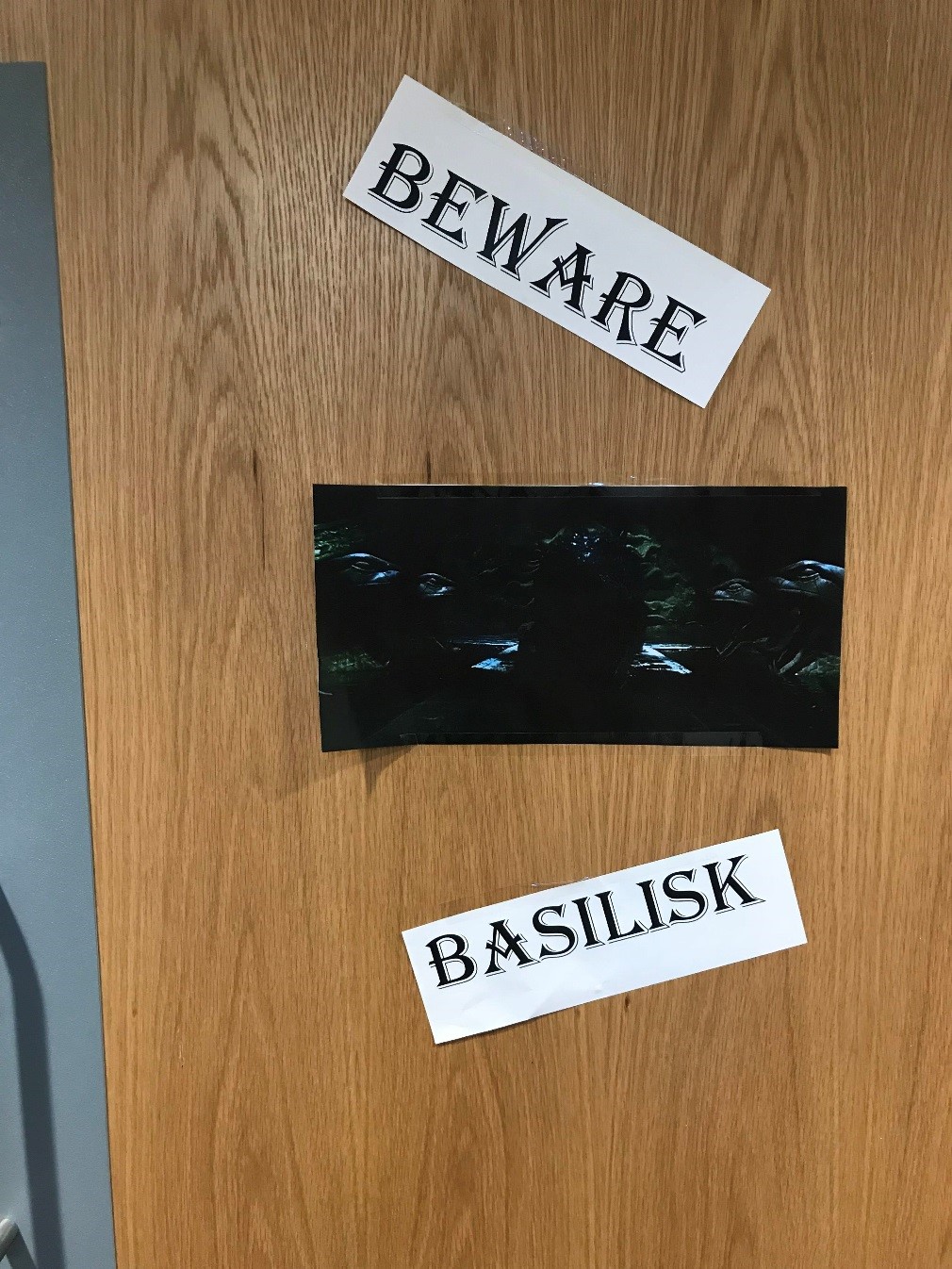 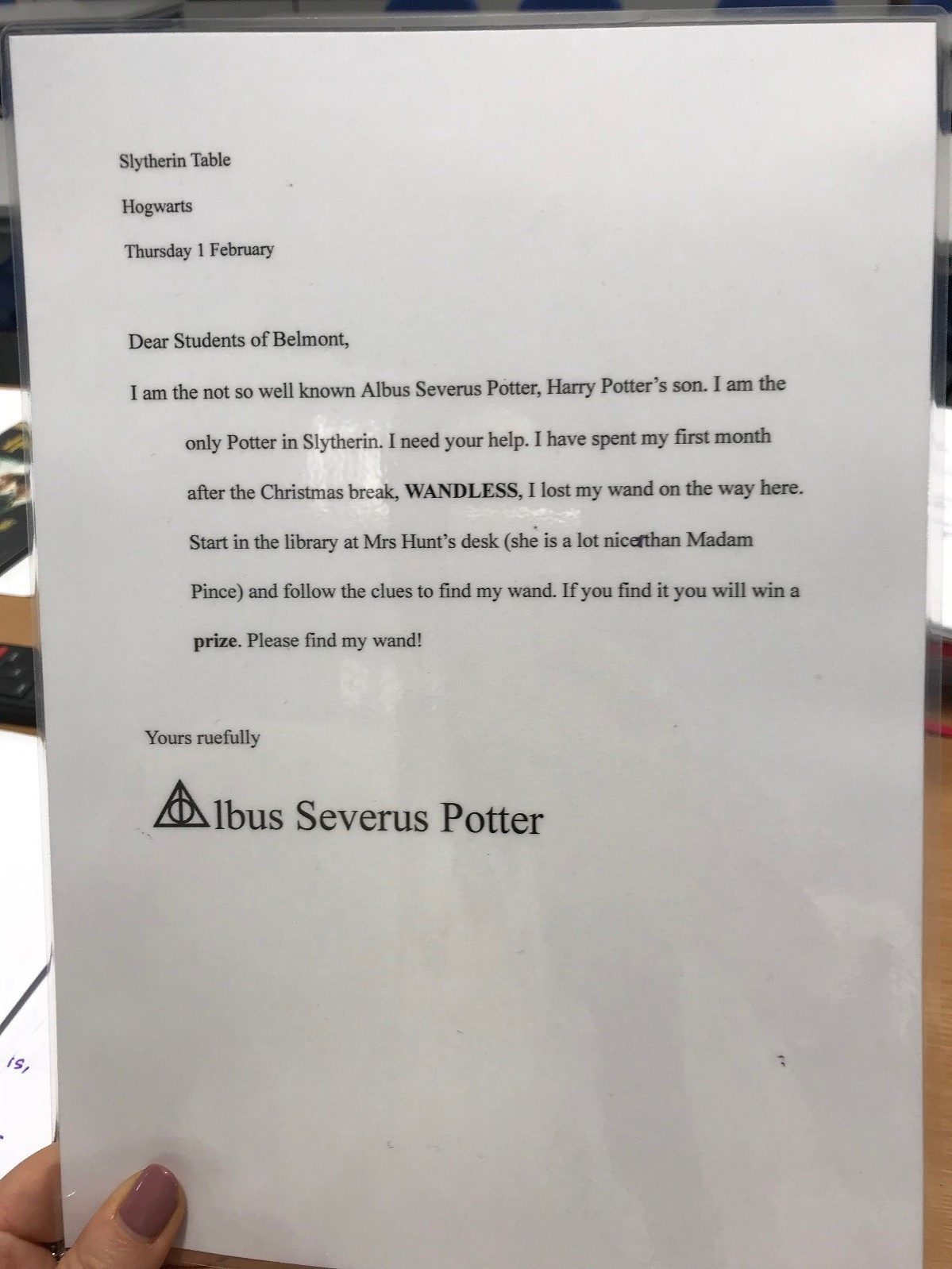 One of the best activities of the day was created by Maya Denton and Kiera Virk: a ‘Harry Potter’ riddle tour of ‘Hogwarts’. Unfortunately, Harry’s son, Albus, had foolishly misplaced his wand and students were challenged to help him find it, through a variety of witty clues:

“For ‘Harry Potter’ Night, I made a treasure hunt around the school. The task was to find Albus Potter’s wand. The clues were mostly easy, if you were a ‘Harry Potter’ fan like me, but some were hard. For example, ‘Bonjour garcon/fille’ sent people to Madame Maxime (Mrs McRill’s) classroom.”

All students who were successful at finding the wand will be rewarded by Mrs Hunt in assembly after half-term.

A huge thank you to Miss Bufton for her tremendous programme of Potter fun, Mrs Hunt for being Galleons better than Madam Pince at making the Library an inviting place to read and be creative, Miss Greaves for her brilliant reading, Mrs Schaller for her ‘eat-your-heart-out-Shirley-Henderson’ costume, the English department for recreating the magic of Hogwarts, and of course to all the pupils (and teachers!) who came to enjoy the fun. 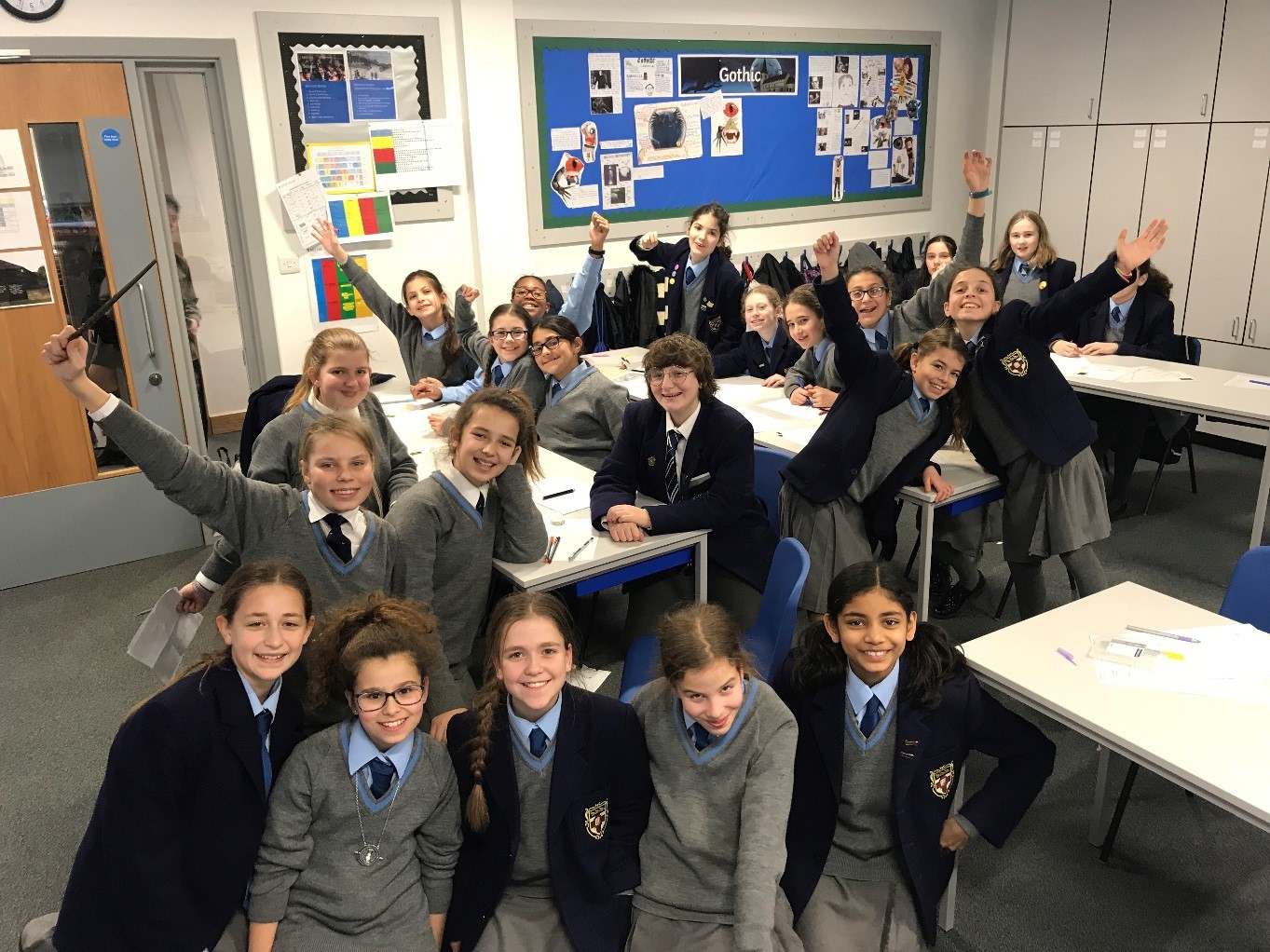