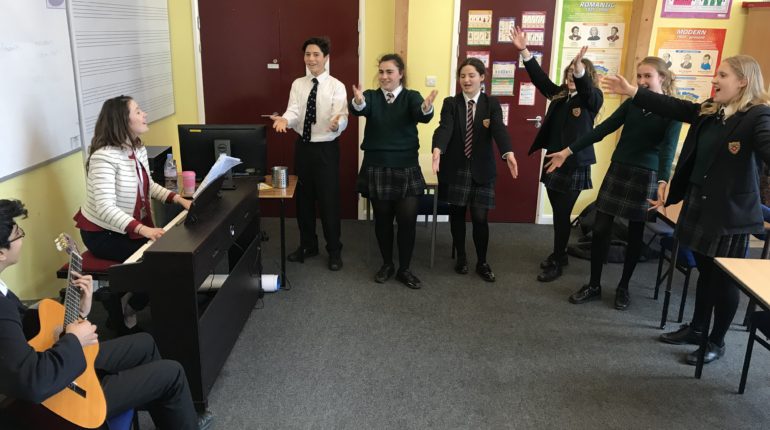 It did not take long for me to track down the Glee Club last Wednesday lunchtime, wonderful melodies echoed through the halls as I approached Music Studio 2. The pupils were practising Michael Jackson’s rendition of ‘Man in the Mirror’ ready for their performance later that evening at the successful Jazz Soirée. Accompanied by the ever enthusiastic Miss Thurtell (Music Teacher) on piano and Omre Urmani (Year 10) on the guitar, the Club were clearly enjoying the freedom of being able to sing one of their favourite songs. Click on the video below to have a listen:

The Club has been running for a number of years now and attracts pupils from across all year groups. Pupils have the opportunity to make their own song choices and enjoy putting their own musical slant on each version; they previously worked on the Adele song ‘Make you Feel my Love’. After speaking to members of the Club, Bella Bodnar, Priscilla Gannon and Georgie Ward it became clear that it gives them a real sense of release outside the classroom; ‘It’s a fun and relaxing way to spend your lunchtime within a close knit friendship group.’

Glee Club is open to pupils of all musical abilities, if you would like to join please speak to either Miss Thurtell or Miss Ward.