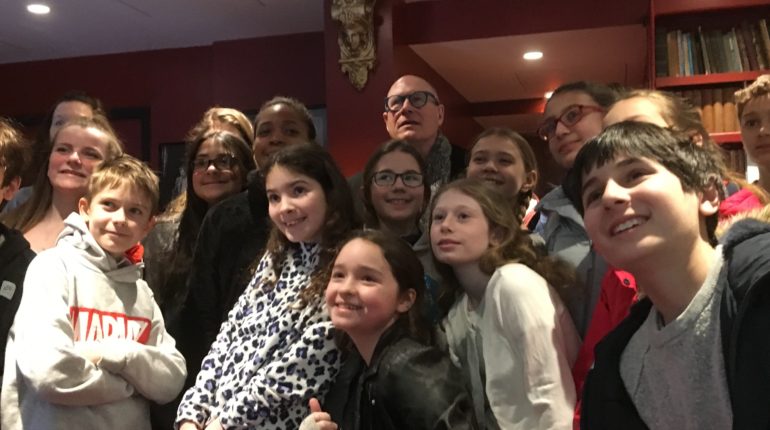 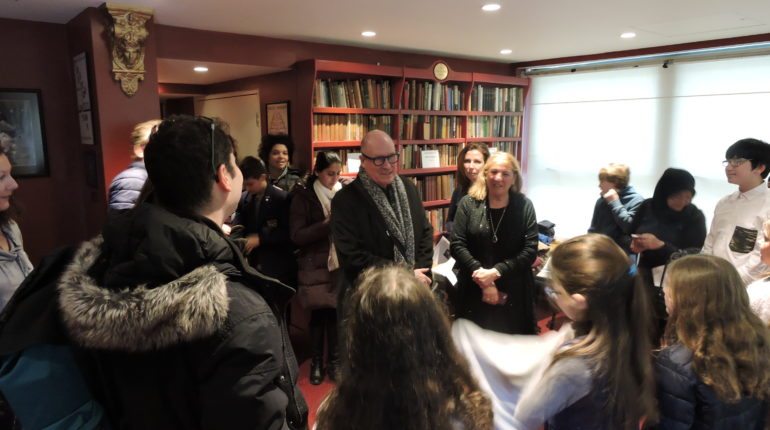 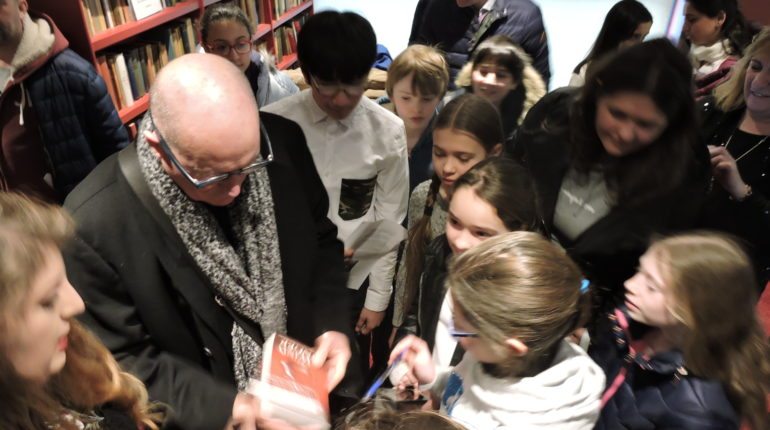 This term I approached Georgina about exploring an idea I had of incorporating junior choirs for a new musical I’m working on. An adaptation of  ‘The Wind Singer’ – based on the young adult novel by William Nicholson, a fantasy, family and now very ‘musical adventure’. Since that first approach and the overwhelmingly positive response the whole process has been humbling. Every week the junior choir rehearse and have been learning the songs, the rhythms and the actions and the work has been fast and challenging. Without the dedication of Georgina, Adrian and Connie who together run the sessions, the support of the school and the focus of the choir we never would have got to the place we got to and what a place that was! After auditioning and selecting the 24 children (which was the most the theatre would take) everything was organised for a school trip and performance for BEAM 2018 (a new musical theatre industry showcase) at the Theatre Royal, Stratford. The choir were due to be performing to they will be performing to the author himself, Schonberg (wrote Les Mis and Miss Saigon), the RSC, the National Theatre, The Ambassadors Theatre, Manchester Royal Exchange amongst many others.

Then came the blizzard, freezing temperatures, Belmont had to close on the day of the show, it looked like we had lost the choir as the trip had to be cancelled. I felt we would loose the real ‘heart’ of the piece and my co-writer and the actors who had just had a fabulous rehearsal in the Chapel with them were equally disheartened. However, thanks to the support and communications from school, and the dedication of the music department, parents and children we got the news late on the Thursday eve that 18 of the children were still going to make it. We were absolutely over the moon. Early the next day the choir and the music department had a fast and furious dress rehearsal with myself, the actors, musical director Cathy Jayes and director Cressida Carré and then they pulled all the stops out and gave a stunning performance in the show. The theatre filled with magic the moment when they joined singing in the Wind Singer Lullaby, they committed a 100% and sounded fantastic, a golden moment of 2018 for me. Thank you.
It takes a few years to get a new musical off the ground but this one is really gathering momentum and we have some very exciting interest following this showcase. I’d love to re-visit this project with the choir again in the future too. Sarah Llewellyn, composer and piano teacher at Belmont.

Some words from my collaborator, Teresa Howard (book and lyrics)…

‘The Belmont school choir gave a tremendous performance, accompanying a cast of top professional actors from stage and screen, to present a first sharing of a new musical in the making – The Wind Singer. The choir stood on the same beautiful Victorian stage where Joan Littlewood set up her Theatre Workshop and produced Oh What a Lovely War. The children far surpassed all my expectations, they didn’t just sing and say the chants we gave them, they really acted the songs, relishing lyrics like “hang the scum” and transporting us with their atmospheric rendition of the Wind Singer Lullaby.  They were a huge attribute to the showcase and we have had an overwhelmingly positive response from all the producers who saw it.

We were so happy to have been able to accommodate the parents in the theatre, so that they could watch the children.  We were also delighted to introduce the children to William Nicholson after the showcase.’