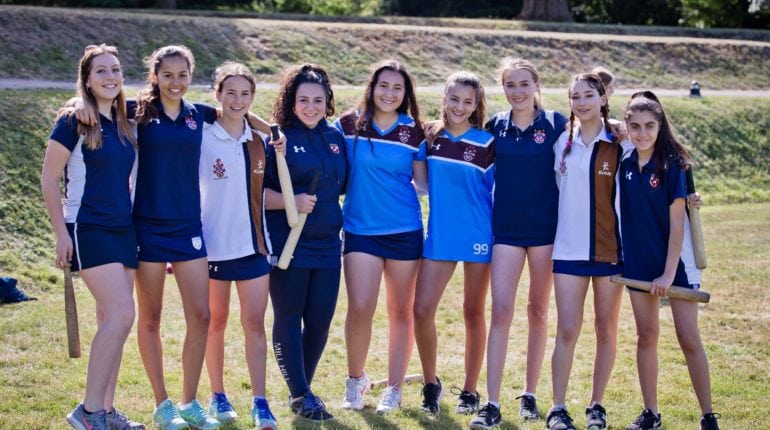 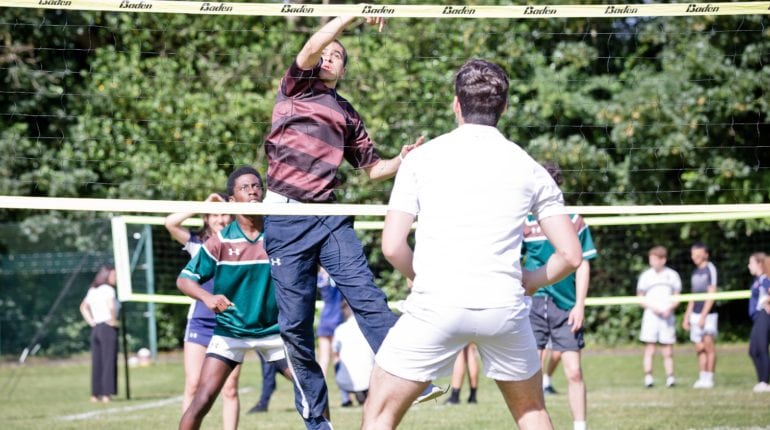 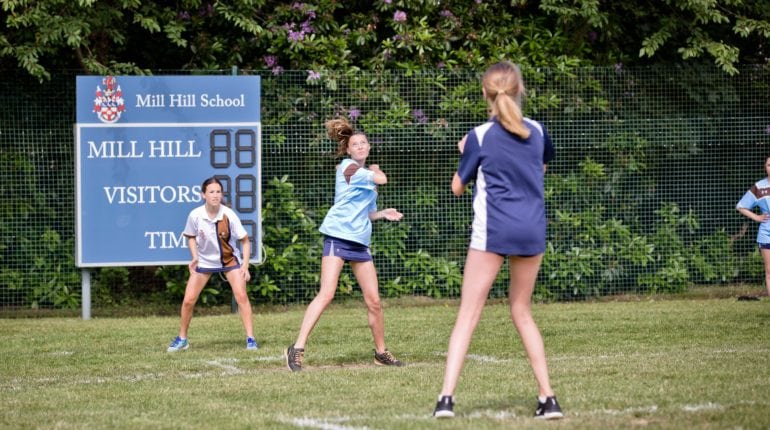 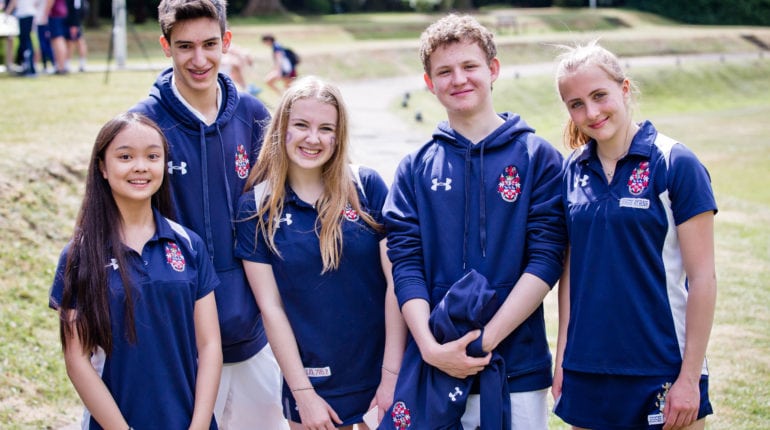 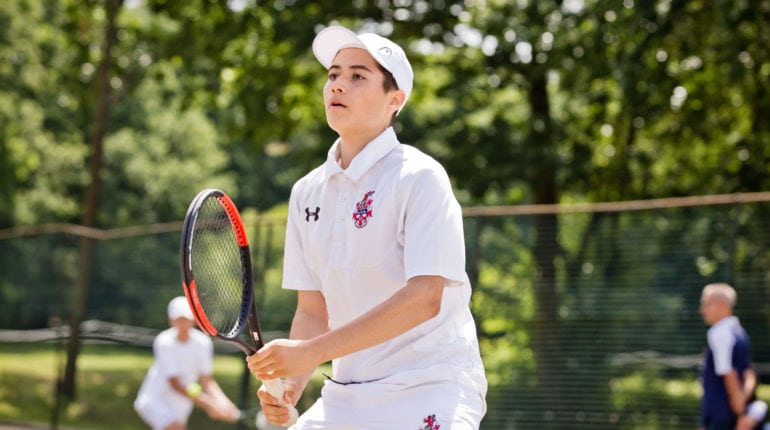 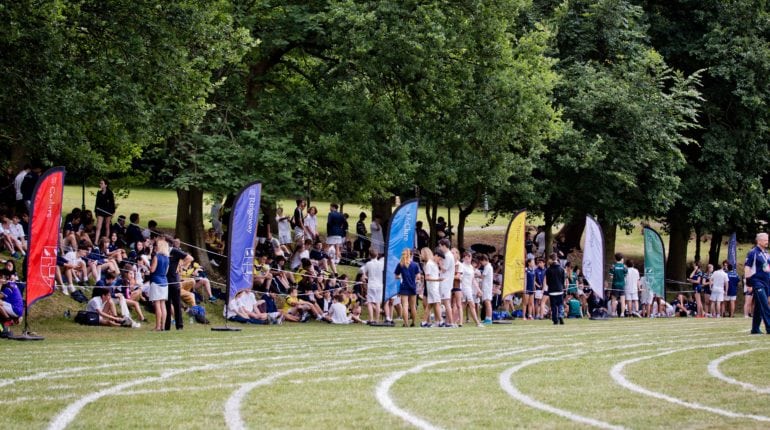 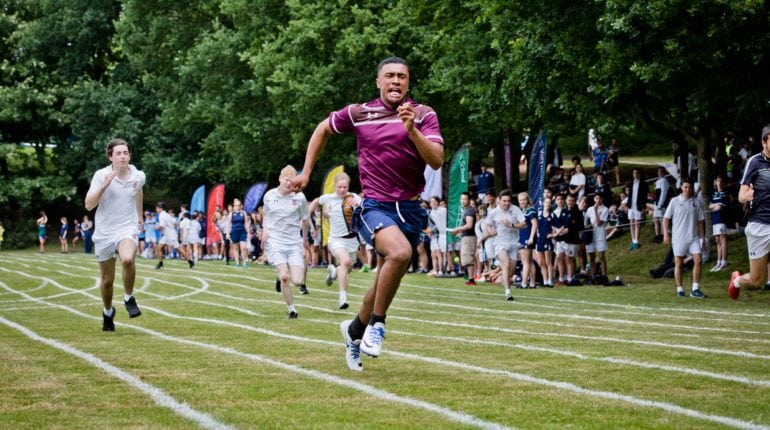 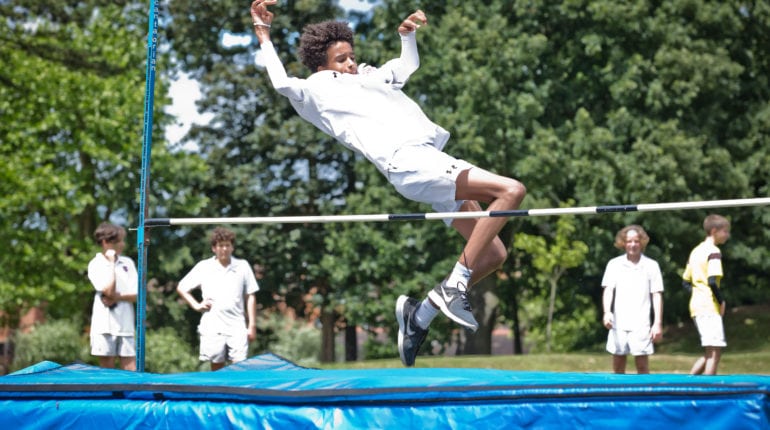 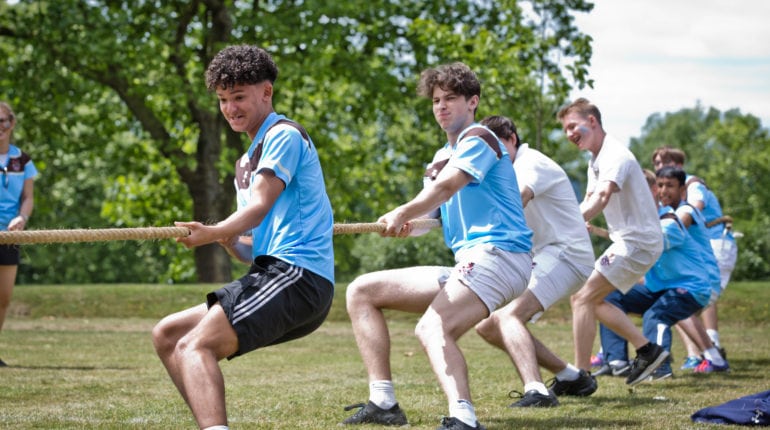 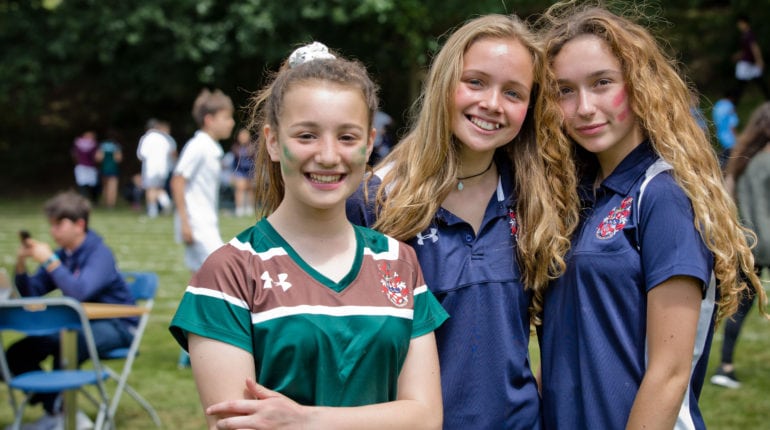 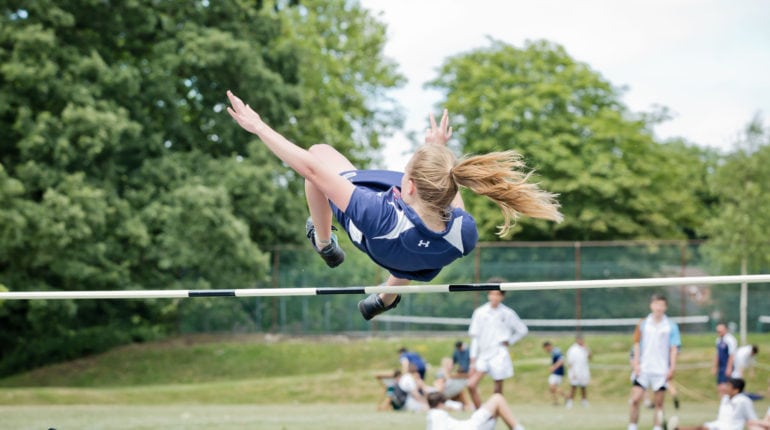 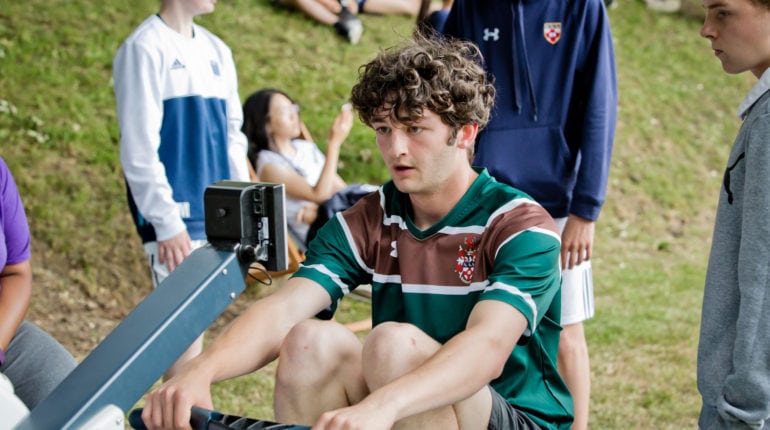 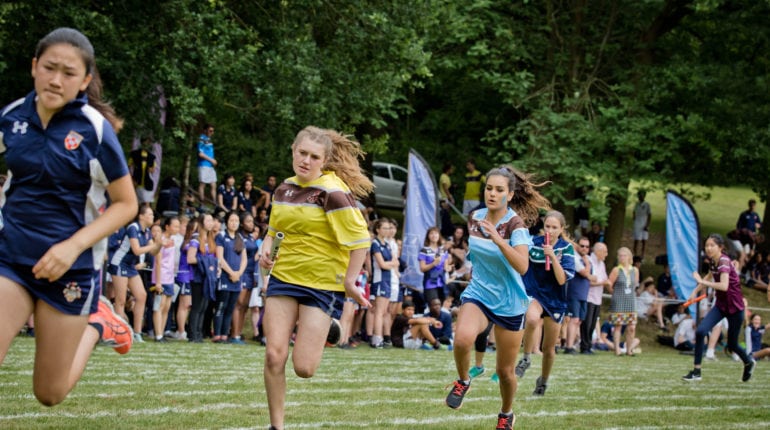 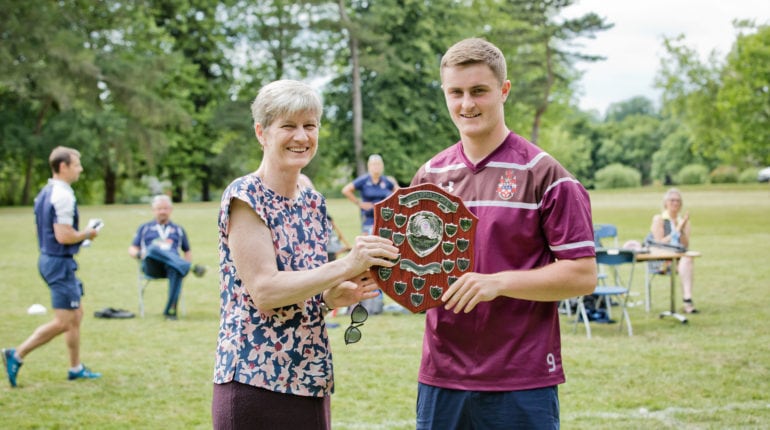 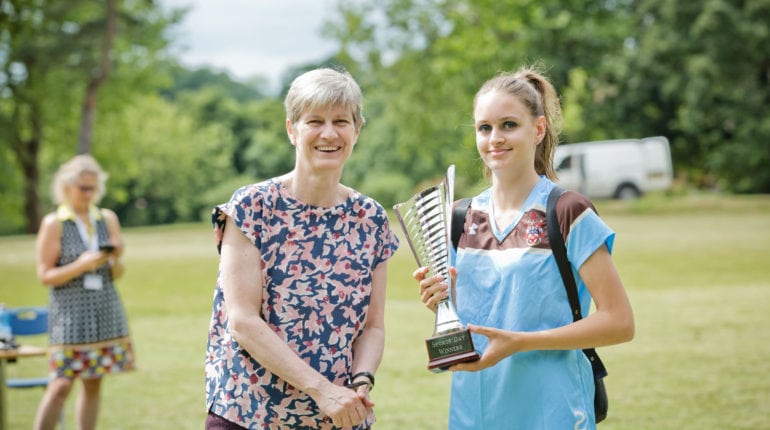 The annual Mill Hill School Sports Day took place on Tuesday 19 June 2018. Pupils from the 7 day Houses and a combined boarding house team competed in the morning of team events and then an afternoon of athletics. On a very warm summer’s day, the morning events started with some big hitting in Rounders, whereby School House beat Atkinson House in a competitive final.

Alongside Rounders, the first part of the morning was taken up with to the Football, Table Tennis, Badminton, Fives, Tennis Doubles, Croquet and the Volleyball competitions. The Boarders were in the lead heading into the break, largely due to outstanding performances from Louis C (Ridgeway House) and Junhao Z (Collinson House) in the Badminton Doubles beating the equally impressive pairing of Keon K and Joe O  (both Murray House) in the final.

The second morning session kicked off at 11:05am with Touch Rugby, Ultimate Frisbee, Basketball, a Netball Penalty Shootout, and the conclusion of the Tennis Doubles and Croquet events. After finishing in second place in both the Rounders and Table Tennis, Mr Bingham had obviously taken full advantage of his “break time team talk” and rallied his troops into a big win in the Touch Rugby tournament.

Elsewhere during the second morning session, the Boarders were crowned Ultimate Frisbee champions, despite close competition from School House. Roles were reversed in the Basketball with School House beating the Boarders in the final. Finally, in the Netball Shootout, McClure House took the maximum points with some sharp shooting from Bella B, Hannah H, Laura M, Alissa B and Maria S.

The Croquet and Tennis Doubles were completed after a whole morning of gameplay. On the tennis courts Priestley House claimed their first win thanks to Aryan D and Luke M. There were some really exciting rallies and both School and McClure House put in performances to be proud of. Down at Park, Mr Kyle was overseeing the Croquet tournament, which again saw the Boarders earn a victory. However, the Cedars pairing of Lauren Mason and Matilde Casarin claimed second spot and gave Cedars House a much-needed boost.

As the staff and pupils had a lunch break before the track and field events commenced, the scores were as follows:

The afternoon events kicked off with the 100m races, of which Atkinson House claimed top spot in two of the four races. Hamzah P posted a very respectable time of 11:97s, only to have his fellow Atkinson House member Dmitry V run an 11:68s in the removes race. Amelia P (Cedars) won the girls’ race with a very reasonable 11:76s. However. the record this year in the 100m goes to the Boarders. Burton Bank’s Roan R ran an unbelievable 10:99s in the Sixth Form Boys’ race.

There were many more fantastic performances throughout the afternoon including:

With the relays counting for double points it was all to play for going into the final events of the day. Could School House create history by overturning the 20 point lead that Atkinson held going into the last four races? Moreover, could the Boarders muster up one last push and secure third place or maybe even second?

As Miss Jakeman called the runners from their House Pens onto the track, you could feel the anticipation building. With the Fourth Form boys up first, all eyes were on Atkinson House and Hamzah P following his blistering 100m performance earlier in the afternoon. Mr Morton fired the starting gun and they were off, he must have given a secret signal to his Cedars House boys; as Dylan P, Tana J, Giorgio G and Enyonam B shot out the traps. Nonetheless, their great start was no match for the pace and great handovers from the Murray House winners (Jed L, Michael S, Stefan G and Dhiren K).

On to the Remove race; Atkinson and School kept up their tremendous performances with a first and second place finish. Then in the Girls’ 4x100m, the School House team of Janset A, Chiara C, Michelle S and Kassi A were simply untouchable and won with a very impressive time of 1:02:24.

The last two races of the day were now in sight, the Sixth Form boys’ 4x100m and the mixed 4x200m. The House pens were rocking as Mr Morton started the penultimate race of the day; School House claimed the top spot in the Sixth Form race and Atkinson House finished in a reputable third place – had they done enough?

The final race of the day was the mixed 4x200m relay; one Fourth Form boy, one Remove boy, one girl from any year and a Sixth Form boy had to be in each team. Leo T strolled home to take the win for School House. Cedars house again performed brilliantly in the relay taking second place, but the team of Hamzah P, Dmitry V, Sam M and Elah C saw Atkinson House into third position.

After a remarkable day of fun, skill and sun, the final results were in:

The teaching staff at Mill Hill School are very proud of all pupils who took part in the day, and we would like to thank everybody involved in making the day one to remember.