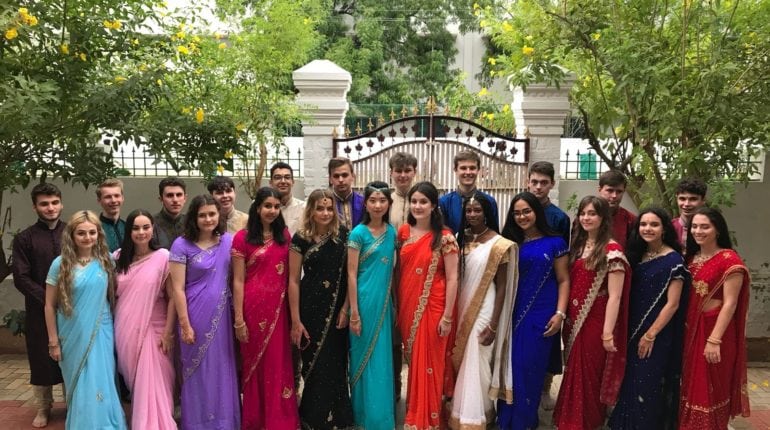 And so to the final chapter, and Mrs Sanchez’s take on the last couple of days. Monday morning began as every day has since we arrived….. breakfast at 8, final planning for lessons and the”assembly”. Except it was a little different as we were all asked to go up on the stage for a final farewell (which actually turned out to be the first of 2). First up, birthday boy, Arthur, received the traditional Happy Birthday song from the School and the Head thanked us warmly for our efforts over the previous 2 weeks. “Mrs Jane Sanchez” was, as usual, asked to say a few words in response before we all gathered to open the newly completed outdoor table tennis tables, followed by the computer lab. Both projects were funded by Mill Hill and we were thrilled to see this new addition to the facilities at Sri Jayendra. We were also pleased to see the PE Department sporting their new kit-very smart- particularly the female staff who have exchanged their saris for polo shirts and tracksuit bottoms.

After a morning of teaching and a curry lunch it was down to the serious business of packing to leave and preening for the Thanksgiving celebrations. Issy and James have written ably about both topics so I will fast forward to Tuesday morning and farewell number 2…. except to note that during the evening we were honoured once more- this time with our own postage stamp!

Tuesday morning, and farewell number 2, saw us on stage again, receiving warm words from the Head, Usha Raman. I was once again asked to say a few words of thanks, an event that was becoming something of a regular occurrence. In reality there are no words to express the gratitude we feel for the warmth, kindness and generosity we have received throughout our stay and which only serve to strengthen the Partnership. Suffice to say, I hopefully conveyed our heartfelt thanks to the pupils and staff at the School which we cemented with a presentation cake- expertly cut and served by the Jayendra senior staff. And then it was time for the children to say their farewells- there were tears and hugs and the stage was nigh on mobbed by the throng of Jayendrans eager to say goodbye, but we came through it unscathed and took our leave in the minibuses that have served us well throughout the tour. Our destination? Kovalam, in Kerala state, for a one night stopover before going on to Trivandrum airport on Wednesday morning.

We arrived in Kovalam after a 5 hour bus journey, broken only for a toilet stop half way. The hotel looked promising but we were to be a little disappointed as the damp sea air seemed to permeate every nook and cranny of the building. Thankfully we would only be there for a few hours…..we were all thinking. Determined that this setback would not dampen our spirits, we headed into town in search of our final Indian purchases, picked up a small pack of friendly local dogs along the way and got soaked in a downpour on our return journey.

The last supper was a low key affair; everyone was tired, contemplating the long journey ahead and needing to get some essential sleep before the 4am wake-up call. That said, the staff team did find time to finish off their card game that has kept them entertained for the duration of the trip- a Mrs Sanchez family favourite- Slippery Anne

So here we are on the very last leg of our journey- Abu Dhabi to London. We’ve dropped Abir off in transit and will say farewell to three more of the group at Heathrow. It’s then back to Mill Hill for a speedy pick up as our arrival unhelpfully coincides with the other great event of the day- England v Croatia; members of the group are already reporting changes to pick up plans to enable the football fans amongst the parents to watch the game!

The trip has been a huge success; the pupils were great company, and superb travellers, who have embraced every opportunity they encountered. More importantly they have given as much as they have taken away and their impact, and their memories, will last a lifetime. I cannot, of course, sign off without thanking the staff who gave so much of themselves to ensure the trip ran smoothly and safely and was sooooo much fun! A reunion curry is already on the cards!!