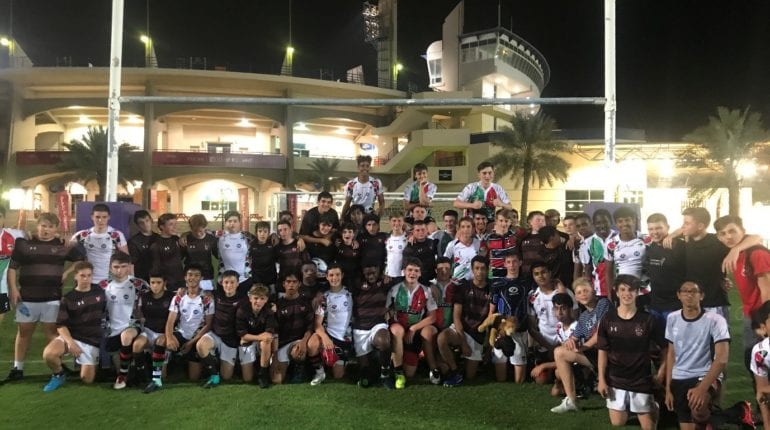 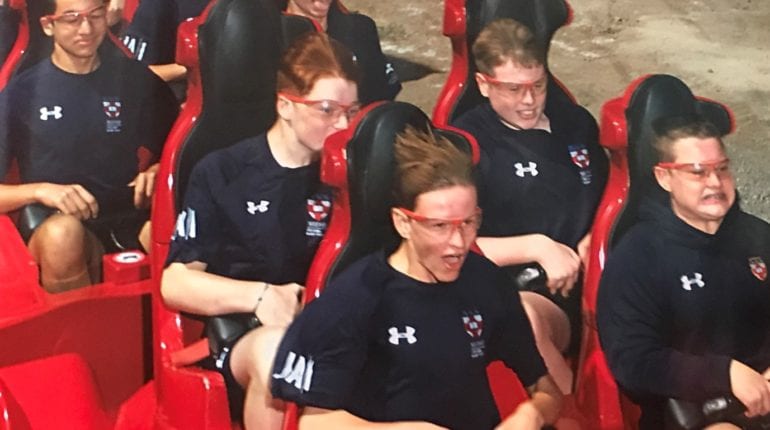 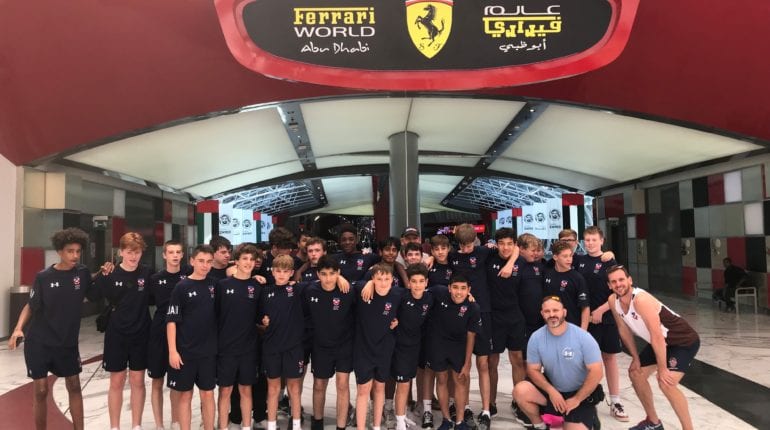 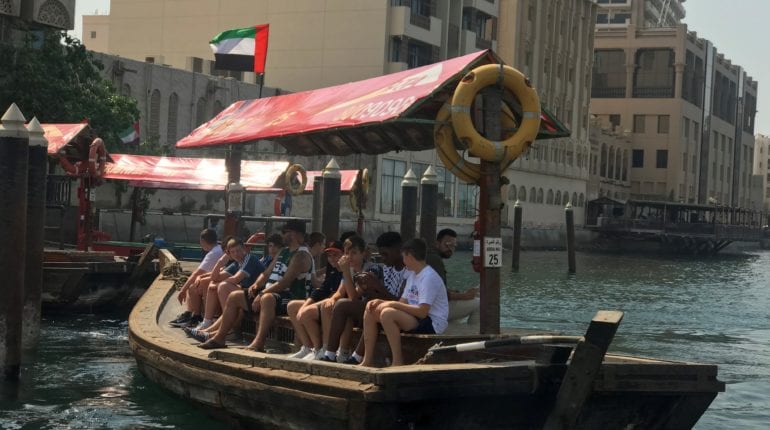 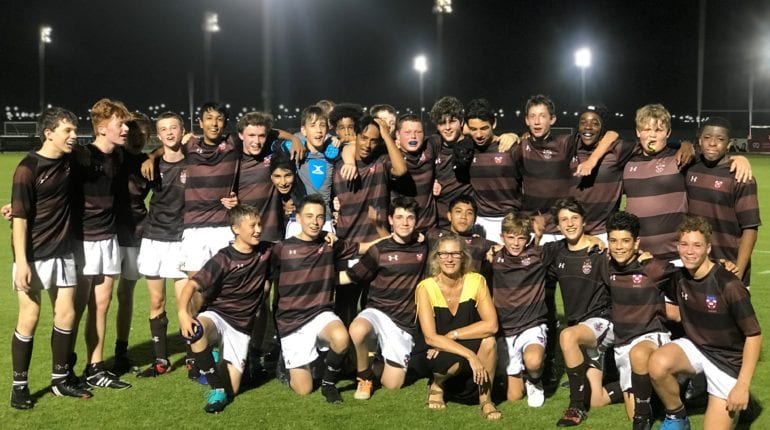 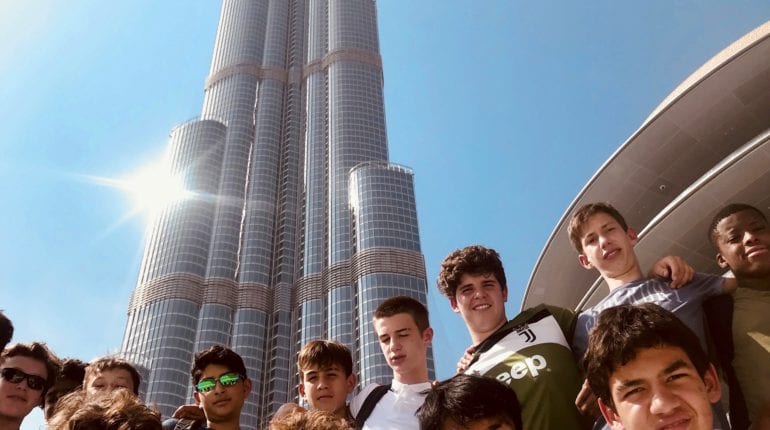 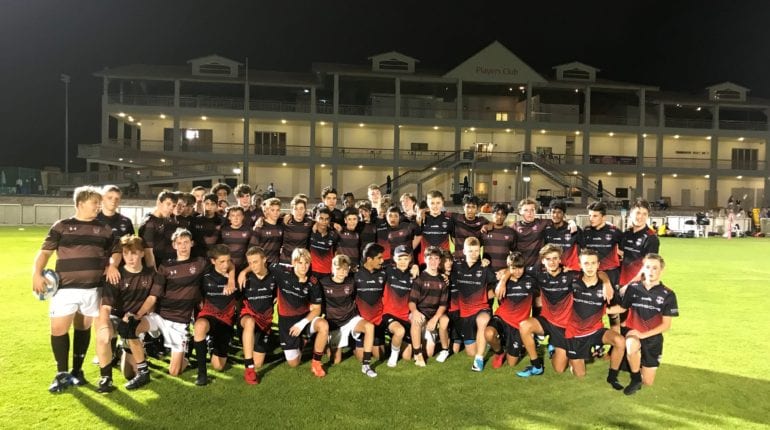 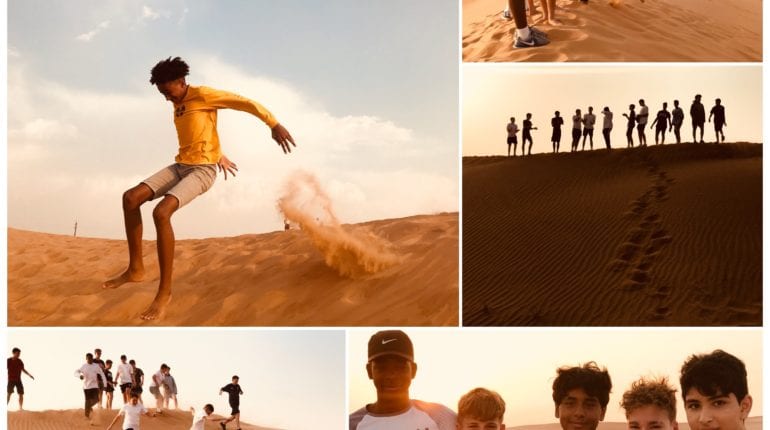 On Friday 12 October 26 U15A-C Rugby players left a sun-drenched evening in Mill Hill to catch their plane to Dubai. This being the first time Mill Hill has toured the UAE we were walking into the unknown with three fixtures to play against Abu Dhabi Harlequins, Dubai Hurricanes and finally Dubai Exiles.

Within minutes of landing, the boys had found their feet and were singing tour songs all the way to the hotel with Mr Dickin, Mr Turner and Mr Liffchak trying to keep everyone in tune. The first day disappeared in a blur of water-filled fun, with pupils getting a chance to visit Wild Wadi Waterpark, one of the largest waterparks on the planet.

The pupils woke early the next morning ready to start their journey South West to Abu Dhabi and Ferrari World, home to the fastest roller coaster in the world reaching 240km/h in less than 5 seconds. Later that evening we made our way to Zayed Sports City to prepare for our first fixture of the tour against Abu Dhabi Harlequins. This was a bruising encounter, after a slow start Mill Hill eventually started to control and took a lead into the half-time. Fantastic breaks down the wing from Giorgio G (Cedars) and Michael S (Murray) with outstanding defence from Captain Ben B (Murray) allowed us to win the territory battle and keep piling pressure on the home side until some strong substitutions from Harlequins left Mill Hill chasing down a 15-point lead and eventual win for the home side.

On Monday, the entire squad took a well-earned rest with time to relax by the hotel pool and then onto JBR Beach, with white sand and clear water the boys were able to flush away the frustrations from the previous evening. A short bus ride to Dubai Mall in the evening gave the pupils a chance to look around hundreds of world famous stores and experience a wonderful team meal at Texas de Brazil, a Brazilian steakhouse where the guests are offered a variety of flame-grilled food.

A well-deserved lie in on Tuesday allowed the pupils time to prepare for their first training session of the tour at Dubai College which was a 10-minute walk from the hotel. The rest of the day was spent driving through Dubai’s deserts in specialist 4×4’s before getting the opportunity to experience a Bedouin camp and meal.

On Wednesday we took in the sights of Dubai’s new and old city using Dubai’s Abras (water taxis) to cross the creek. Pupils enjoyed taking in the sights and smells of the old souk’s twisting laneways where locals and tourists alike haggle for gold, spices and textiles with the vendors. Later that evening saw us joined by Mrs Sanchez for our fixture v Dubai Hurricanes. An outstanding performance from the entire squad got us our first win on tour with highlights including a fantastic chip and chase try from Kahil O (School), and break from Giorgio G (Cedars) with support from Michael S (Murray) on his birthday to finish off the evening in style!

On the final day of the tour the squad visited the world’s tallest building, the Burj Khalifa followed by lunch in Dubai Mall and time spent watching the water fountain show. The rest of the day was spent preparing for our final and toughest match against Dubai Exiles. The Exiles did not disappoint and it was a game played at pace from the first whistle with the ball rarely going out of play. This speed took the Mill Hill boys by surprise and they learnt very quickly that maintaining possession in the contact area and reducing their unforced errors would be the key to winning the match. A late try before the half-time whistle took the wind out of Mill Hill who had been defending for the most of the half successfully keeping them out. The second half was a clear example of the physical and mental impact the tour had taken on the players with Exiles running away with a convincing win by the final whistle.

The first-ever Mill Hill School rugby tour to Dubai was a huge success, with the pupils coming back having experienced a different culture and building an unshakable bond from touring and living with each other for the past week. Thank you to Mr Turner and Mr Dickin who gave up so much of their time to help deliver the aims and objectives of this tour. The boys and staff together made this an unforgettable experience and we are already looking forward to taking next year’s U15 cohort.

The video below shows the highlights of the trip: