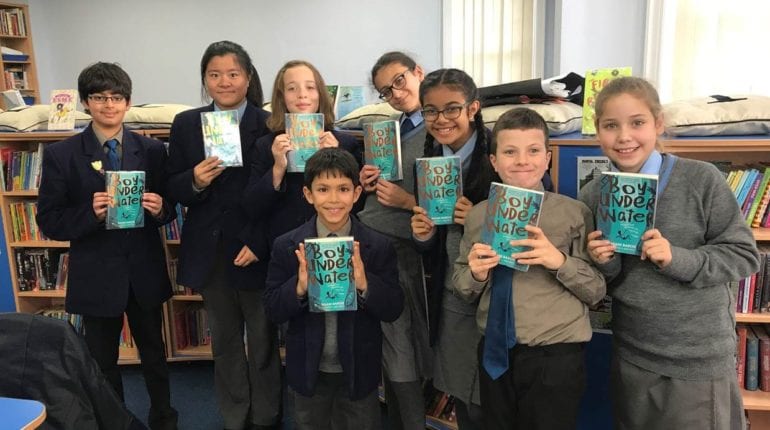 This week, Upper School Book Club have been continuing their discussions of Boy Underwater, Adam Baron’s humorous, poignant yet uplifting tale about a boy called Cymbeline Igloo. Miss Bufton kicked off the discussion by asking pupils for their thoughts, a selection of which are below.

Maximilano said “My favourite part is when he’s in the swimming pool and has just done the race and his trunks fall off – it’s really funny! I liked the mystery when they introduce fencing later on. If I could change one thing about this book, it would be when Bradley/Lance stood up and said “That looks like Cym’s mum!” because it was really mean of him.”

Eleanor said “My favourite part is where the 3 children give their Uncle a solution to all of his problems!”

Prisha said “I liked Veronique the best because she’s sympathetic to Cym and helps him through his struggles”. Caroline agreed, saying “she’s very creative and encourages Cym to go further into the mystery of his past”.

Noah said “I felt really sorry for his mum because she has to go hospital early in the book, and the characters say it’s because of her ‘headaches’, but that’s obviously not the real reason.”

The group also discussed the tone of the book, which frequently switches between hilarious and heartbreaking. If you’d like to read the book for yourself and see what you think, just pop into the Library and ask Mrs Hunt! (Year 5+)