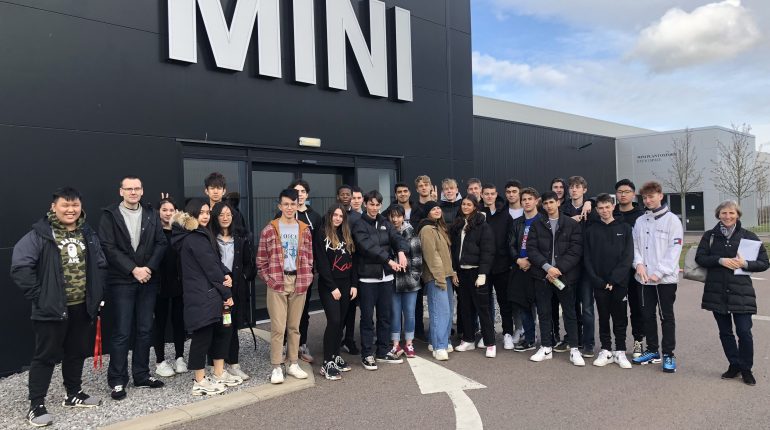 On Tuesday Lower Sixth Business pupils took a trip to the BMW Mini plant in Oxford, led by Mr. Smith and Mrs. Stoughton-Harris. As soon as we arrived we were taken to see a display of car models that BMW Mini have produced throughout the years dating back to the 1900s. It was fascinating to see the amount of innovation and creativity involved along with the developments made over the years in all aspects ranging from the body colours, width of tyres and aerodynamics of the various

After being introduced to our guide and watching the short health and safety briefing, we put on the required safety gear and set off to our first destination, the ‘body in white’ area. Here, the bodies of all BMW Mini car models are manufactured are produced. The work at this stage of the production line is predominantly automated and uses a vast array of machinery such as robot arms, which weld together different parts of the body. Our guide described the huge impact the machinery has had on the workforce, as the number of workers had drastically decreased from around 5000 to 200.

We then learnt that the production of the vehicles is carried out using a method called cell production, where the process is broken down into separate areas or ‘cells’. Seeing around 1000 machines all working simultaneously was definitely the highlight of the trip. Productivity levels at the plant are extremely high due to the speed and precision of the technology, however this comes at a high cost of around £50,000 per robot. We also learnt how BMW Mini control their stock using the Just in Time method, although they also keep some buffer stock to ensure production is never disrupted.

We then moved into the assembly area of the plant where their were more workers and far less machinery. The main automation here was the cleverly designed part transportation system above the main assembly line, which maximises the use of available space. A flow production method was used at this stage of production; different teams added specific parts to the car resulting in a finished product at the end. It was interesting to see that the workers operate in a lean fashion to reduce waste, they are encouraged to adopt a ‘Kaizen’ approach. This is a Japanese word for continuous improvement so that the work is more motivating as they are able to come up with new ideas to make production more efficient while limiting waste and time.

I thoroughly enjoyed the trip and think it was a great experience to gain a better insight into the day to day business of a high-quality, large scale car manufacturer. It was also very useful as I was able to witness firsthand all that we have learnt in the classroom, which gave me a deeper understanding of business in general.